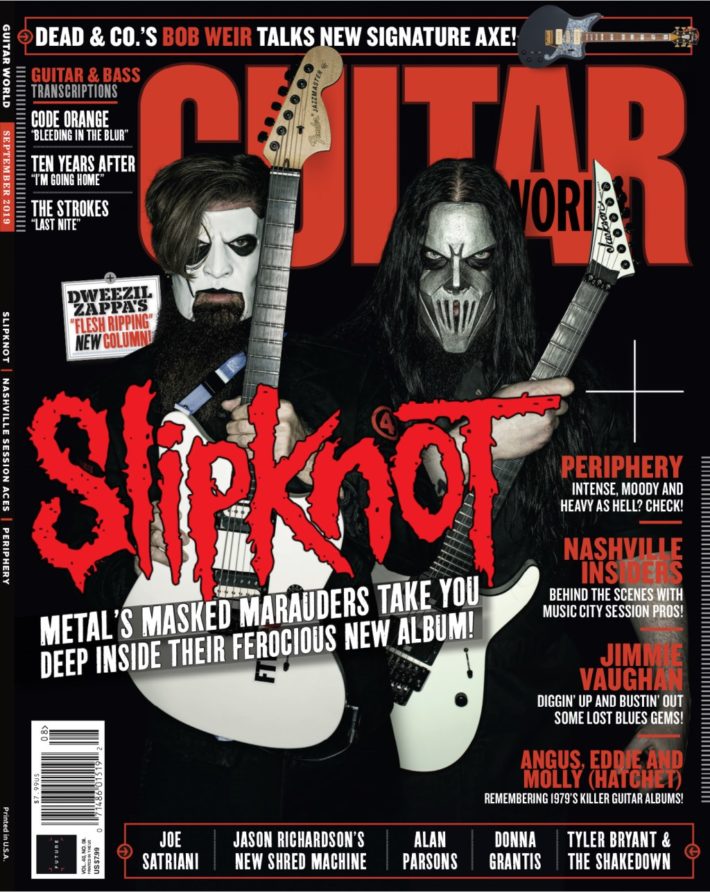 For the cover story, Richard Beinstock caught up with metal axemen to talk about the writing process of the band’s new release, We Are Not Your Kind, which debuted at No. 1 on the Billboard 200 charts.

The critically-acclaimed album is the heavy metal outfit’s first release in five years, and allowed the Iowa-bred unit ample time to let the songs breathe.

“One cool thing about the longer time period for this one is that it gives you a longer vision,” explained Thomson. “I’ve never understood when you see a band go into the studio and write for two weeks or something and then they put out a record. I’m like, ‘How do you know that you even liked that riff?’ Because sometimes something seems kind of cool, but after you’ve played it a few times, you’re like, ‘Ehh… I don’t know.’

“But this time we were going into studios and working on these songs at different points, and then other new things were coming up to go along with what was already on tape. We had a longer time to live with everything and to decide how much we liked or didn’t like something.”

What the band liked—which included stretching their metal boundaries to include nu metal, groove metal and extreme metal— admittedly might not be something all diehard Slipknot fans are on board with. As Thomson explains, the unorthodox genre-bending direction inspired the album’s title.

“It’ll be loved, it’ll be hated, but whatever,” Thomson said. “We’re certainly not for everybody. And if you don’t like it, I mean, who cares? We’re not interested in being all things to all people. We’re just trying to remain honest to ourselves.”

Thomson also dished on the gear he used for the album.

“For guitars I used my signature Jackson Soloist models, and in some cases I switched out the pickups for Seymour Duncan P90s just for a totally different sound,” said Thomson. “In one case it was the P90s going through a fuzz pedal into a Fender ’65 Super Reverb reissue. So there’s an amp you probably wouldn’t think you’d be hearing on a Slipknot album.”

Read the rest of the interview here, and find out where you can catch Slipknot on tour in support of We Are Not Your Kind here.