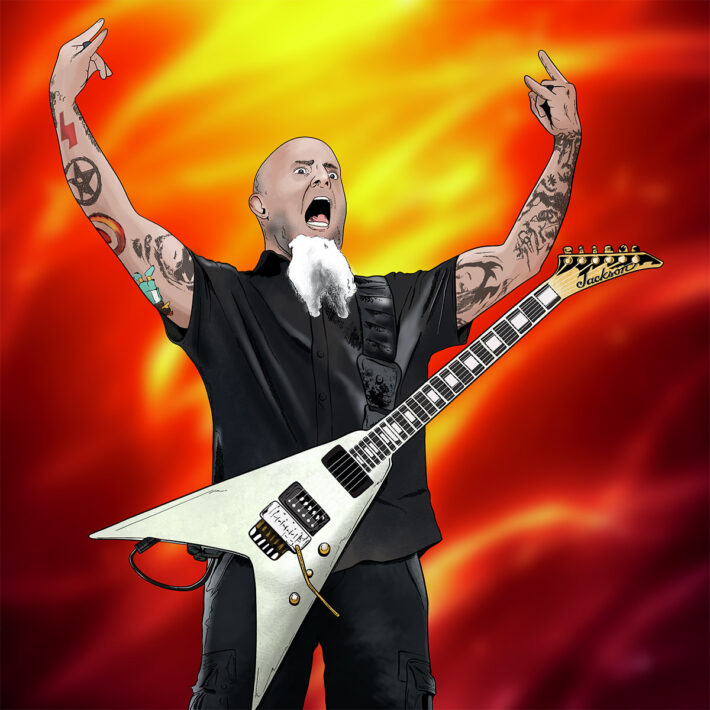 Artwork By BC Graphix LLC

“My first time seeing and hearing a Jackson was Randy Rhoads playing his Concorde onstage with Ozzy Osbourne back in 1982, and I knew then I had to go try one out. There was a Sam Ash store on 48th street in Manhattan that carried them at the time, so I went down on my lunch break to try a Rhoads out. Right out of the box I fell in love with it and asked “How do I get one?“ Back then you had to custom order everything, which is exactly what I did. I worked my ass off and saved up enough to order my iconic NOT Rhoads – the one with the word NOT across the horn and side, it’s on the back cover of Spreading The Disease, THE ONE. Originally, it had a yellow and black leopard finish on it – which I didn’t like very much. I went back and had it refinished to include some graphics that I had drawn including the NOT on the horn and side of the guitar along with a few other graphics. This became the guitar I was definitely most known for in the 80’s.⁠

In 1985 when Spreading the Disease came out, Danny Spitz and I were looking to get endorsed by Jackson since we were both huge fanatics of their guitars. After reaching out, we heard back from a rep who said “Yeah, we’ll endorse Danny, but not Scott because he isn’t a lead guitar player”. I was honestly a bit sad and disappointed. No love for the rhythm guitarist? Three years later in 1988, a buddy of mine who had started working at Jackson reached out and said they wanted to build me a guitar and come on board as an official endorsed artist. That first guitar I had built as an endorsee was the New York Yankees Soloist, with a single pickup, and the NOT inlay at the upper frets which were fretless past the 14th fret – which came in handy when we did ‘Bring the Noise’ with Public Enemy since I would just slide up it with my index fingernail to emulate the high pitch horn sound the song had. That guitar ended up being one of my favorites of all time and soloists kind of became my thing after that along with the Jackson JJ models. Recently, I went back to the V shapes and have had a few Custom ones made, along with some new Signature V’s. To be continued…”