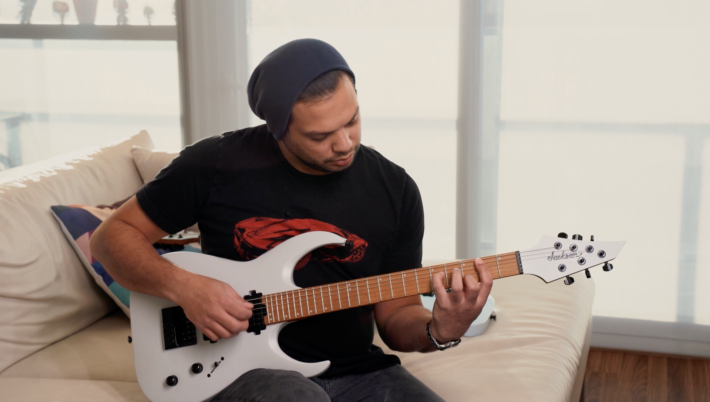 “For those of you who know what an EverTune is, I’ve been using them in the studio and live and I love them,” explains Mansoor in the video below. “If you don’t know what it is, it’s a magical bridge that keeps your guitar in tune. It’s kind of insane—some super complicated tension-based system, but if you set up the guitar right, you can strike a string as hard as you want and it will never go sharp or flat. You can even set it up in this ‘safe zone’ as I call it where you can still bend – you just give it a little more than you usually would. Anyone who records knows how much time is spent in the studio just tuning your guitar. It’s a huge time saver when tracking and recording.”

“The MM1 pickups are just super versatile especially with the five-way switch,” says Mansoor. “We’ve got second position doing split inner coils, which is nice for spanky cleans and mid gain tones, and fourth position, which is split outer coils, which gives you that chimey, almost Strat-like sound.  Then you’ve got bridge (first), middle (third) and neck (fifth) with humbuckers.”

Watch Mansoor run down the specs and demo the instrument’s versatile sound in this exclusive Jackson video below.