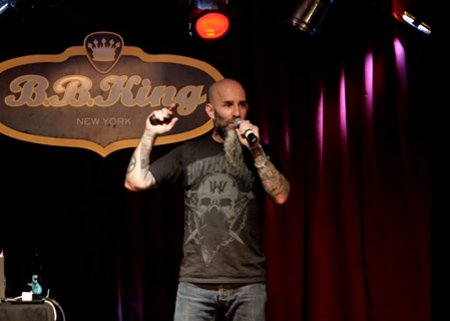 For those who haven’t been able to see Scott Ian’s Speaking Words tour in person, the Anthrax guitarist recently launched a Pledge Music campaign to release a DVD of the show.

Filmed in Glasgow, Scotland, the footage captures one of Ian’s best storytelling shows, in addition to a raucous question-and-answer session with fans.

The Pledge Music incentives range from a $10 HD stream of the DVD to a $25,000 “Vegas Adventure + World Series of Poker” experience with Ian.  There are many other gifts at levels in-between, such as handwritten lyric sheets, one-of-a-kind guitars and a private Speaking Words show.

“Anthrax fans have always been loyal and supportive and that has allowed me to act like a rock star for more than 30 years,” Ian explained on his Pledge Music page.  “So, I wanted to reach out first to my fans to help finance this one-of-a-kind DVD that reveals more about me, my sense of humor and my bizarre career than anything you’ve ever read or seen.”

Click here to pledge and watch Ian discuss the tour in an interview with Artisan News below.