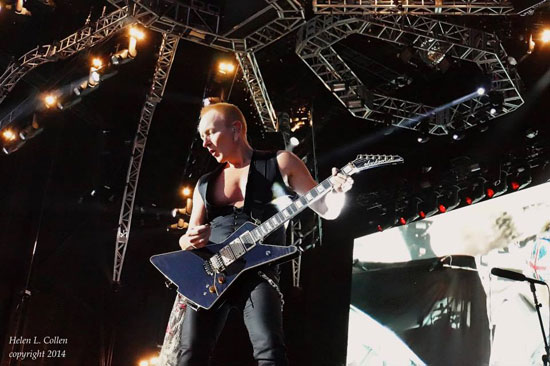 When the Def Leppard co-headling summer tour with KISS kicked off last week in West Valley City, Utah, fans in attendance were among some of the first to see the brand new Jackson X-Stroyer guitar, custom built for lead guitarist Phil Collen.

“This guitar isn’t an exact carbon copy of my Ibanez Destroyer; it’s aesthetically based on the one I played in Def Leppard’s classic videos for “Photograph,’ ‘Rock of Ages’ and ‘Foolin’’ in the 1980’s,” said Collen.  “Somehow that guitar seemed to take on a life of its own with the fans when they saw it in the videos.

“My new Jackson PC X-Stroyer is the exact opposite with regards to the body outline/perimeter,” he continued. “The X-Stroyer has a mahogany body with a maple top that looks solid black from a distance, but then when you get up close you can see the beautiful wood grain of the Trans Black finish. It has DiMarzio pickups, a Floyd Rose tremolo with FU Tone titanium block and saddles and a Jackson Sustainer/Driver pickup same as I have in my Jackson PC1s.

“My X-Stroyer has a very thick neck, which also helps the tone. This guitar feels and sounds expensive. The intent while building the new instrument was to have a body shape that invokes the ‘spirit/enthusiasm’ of my classic model, but with a twist. Mike Shannon, Jackson Senior Master Builder, really went overboard for me on this one, and I think it’s the best Jackson guitar I’ve ever played.”

In related news, Jackson has announced plans to release another Phil Collen signature model that will be available to the public in August. The Jackson PC1 Ninja, a limited-edition model from the prolific guitarist’s PC line with Jackson, will be available in two versions. Only 25 of each are currently being built in Corona, Calif.