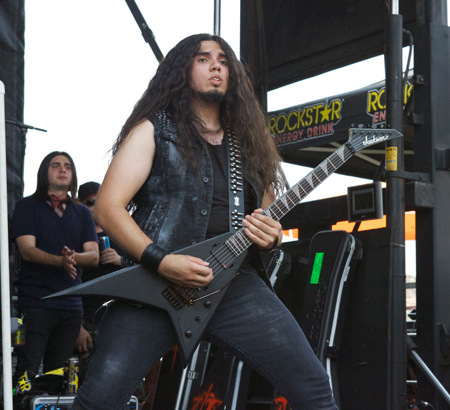 Los Angeles has spawned countless metal bands over the years, and the next big name to come out of that scene might be Thrown Into Exile.

The hard-charging quintet put out an acclaimed eponymous EP over the summer that was produced by Devildriver guitarist Mike Spreitzer, and then destroyed crowds across the nation while on tour with the Rockstar Energy Mayhem Festival.

Thrown Into Exile now has designs on landing with a label and eventually releasing a full-length album.

JacksonGuitars.com recently caught up with guitarist Mario Rubio to talk about where his band is going and some of his influences..

JacksonGuitar.com:  You’ve been playing a Rhoads on stage for a while now. What drew you to that guitar?

Rubio: When I think about Jackson guitars, right off the bat, it’s obviously Randy Rhoads. Zakk Wylde has played some of those Randy Rhoads models. Corey Beaulieu from Trivium, too. There’s even some of the more recent guys, like Christian [Andreu] from Gojira. The list goes on and on.

I always look at it like Jackson has always been the ultimate fucking metal guitar. My graduation present in the eighth grade was a Jackson Warrior, and I remember opening this giant box and being blown away. That was the only time I ever had a trem, so I was going crazy doing dive bombs with the Floyd. Those are some of the things that come to mind when I think about Jackson.

Lately, my guitar choice has been the Rhoads. It’s got that iconic body shape, and it just feels right. I think more people should be playing that shape on stage. Being able to balance it just feels comfortable to play in that classical way.

JacksonGuitars.com: What drew you to play the guitar?

Rubio: In elementary school, I was listening to bands like Slipknot and Slayer. I’ll never forget being12 years old, and my mom had just finished her tax return, so she gave me $100. She said, “Go have fun.” I walked out of the store with a Ramones tribute album that had Rob Zombie and all these other bands. I also got a KISS greatest hits album. And then, I came across this album that said Pantera on it. Cowboys From Hell. It was next to a Meshuggah record, and I went with Pantera, because you saw “Dime” [guitarist Darrell Abbott] on the floor, and Phil [Anselmo, vocalist] jumping in the background. And just the term “Cowboys From Hell” was pretty badass. I remember popping that CD in and thought, “I need to do this.”

From there, I got into Slayer. My first record of theirs was Decade of Aggression, which was a double live album that had all the hits on it. My mind was blown. Once I turned13 a couple of months later, my first concert was actually Slayer. Arch Enemy and Hatebreed were also on that bill. I remember feeling so stoked, but at the same time, a little wrong. I grew up in a Catholic household, and my grandmother would see all these album covers on my floor with inverted crosses and pentagrams. [laughs] I remember hiding my Cannibal Corpse records and things like that.

JacksonGuitars.com: What does your family think about you being in a metal band now?

They’re beyond proud. Starting with my grandmother, she bought me my first guitar. My mom at first wanted to pursue another career, but she’s come around. She’d still drive me to practice, too. One of the coolest moments was seeing my family at the Mayhem Fest in San Bernadino. That was definitely a feeling of accomplishment. 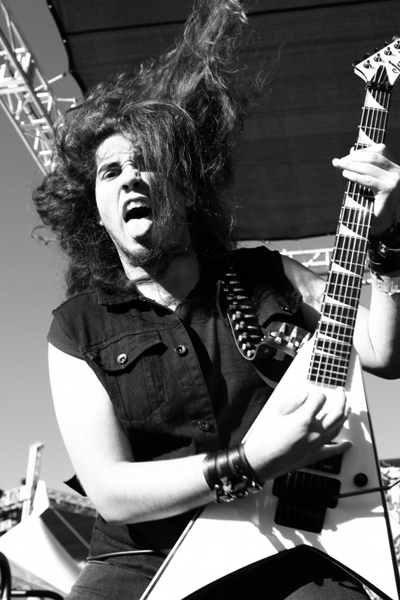 JacksonGuitars.com: Was Mayhem a milestone for the band?

Rubio: Absolutely. That was my first tour ever, my first time outside of California – there were a lot of firsts. I never thought my first tour would be on a bus, with one of my favorite bands in Machine Head. When they released The Blackening, I was in high school, and it changed my life completely. If I had to make a list of the top 10 albums, that would definitely be on it.

And seeing Rob Zombie, Mastodon and some of the bands that were on that tour, it was amazing to get to hang with them.

JacksonGuitars.com: What has Thrown Into Exile been doing lately?

JacksonGuitars.com: How does the writing process work for you?

Rubio: Man, I’ve been hiking a lot lately, as early as 6:30 in the morning some days. When it’s still black out, listening to black metal is pretty interesting. So I come up with a lot of ideas when I’m just alone like that. It’s a combination of things. Sometimes, I’ll be sitting on my computer working on stuff, or I’ll be driving, tapping something out on my steering wheel. Or I’ll get up at like 4 in the morning, thinking about a lyric. I’m always on the clock in my brain.

JacksonGuitars.com:  How did you hook up with producer Mike Spreitzer for your EP?

Rubio: I met him as a fan when I was like 16 or 17. At the time, I was working for another guitar company. We were working on material, and the idea of him producing came about. We were totally into it. My guitar player Colin actually went on tour with Mike and his other band. We just thought it made sense [to have him produce]. We’re a straight-up metal band, so it made sense there, and there’s obviously the benefit of having his name attached. Thankfully, all the stars aligned. It took a little time for the EP to come out, but we got it done.