While on their fall tour to close out the year, Death Angel’s Rob Cavestany decided to play Santa for a few lucky fans, as the guitarist gave away three autographed Jackson JS32 Rhoads axes.

Greg Pelgor of Scottsdale, Ariz., was the first winner back in October, and up next was Caprice Hong, who received her winnings at a concert in Worcester, Mass.

Video of her reaction can be seen below:

And finally, here is a picture of winner Dave Bouvier of Buffalo, N.Y., clutching his new axe with the guys: 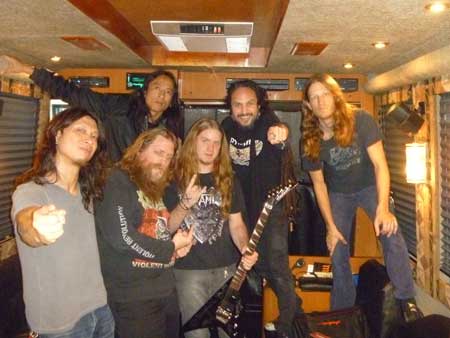 Congratulations to all the winners!

Death Angel just recently finished their 2011 slate of shows, but the band will be busy in 2012.  In January, Death Angel will kick off a seven-date tour with Anthrax and Testament.