Canadian progressive metal band Protest The Hero has been touring extensively off their 2011 release, Scurrilous.

But even though the guys are wrapping up the year with a Dec. 22 show at Pittsburgh’s Mr. Smalls, Protest The Hero has already announced several European dates for 2012.

Beginning March 1, PTH takes on Antwerp, Belgium before hitting the U.K., the Netherlands and Austria.  A full list of stops is available here.

While the band was making its way across North America, guitarist Luke Hoskin sent JacksonGuitars.com this picture of him playing a USA Select SL2HT Jackson Soloist on the road: 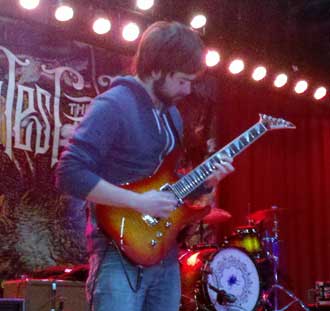 As you wait for Protest The Hero to hit your town in the coming year, here’s the music video for their latest single, “Hair Trigger:”