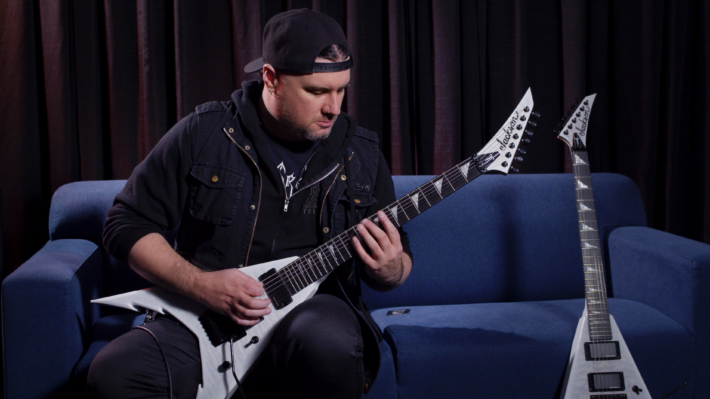 Trivium’s Corey Beaulieu sat down with the Jackson team in a new video and discussed the inspiration behind his all-new Pro Series Signature Corey Beaulieu King V™ KV6Q and KV7Q models.

“A lot of kids nowadays don’t know the feeling of flipping through a Musician’s Friend magazine that you get in the mail,” said Beaulieu. “But the Jackson section always had the King V, like Dave Mustaine had, and the Jackson Kelly from Marty Friedman at the time. Being a big Megadeth fan at the time and seeing those guitars in magazines and ads in Guitar World, and that stuff always resonated with me. I was always striving to eventually get a King V!”

As fate would have it, Beaulieu eventually joined the Jackson artist roster and was able to construct his own version of the assertive Jackson King V.

“Everything’s based off the original because I love that guitar,” said Beaulieu. “They could send me one from the factory and I don’t really have to modify it. It’s just cool!”

While Beaulieu never got into the fuss over what type of woods to use, he did come up with a unique flair to the overall aesthetic of his signature model. After years of back and forth with the Jackson team on his prototypes, the Trivium guitarist designed the assertive serrated cutouts in the V, quickly sketching it out on a piece of paper in the back of his tour bus.

“It kinda hit me and I just scribbled on a piece of paper,” recalled Beaulieu. “They were like, ‘Alright, I think we can bring this to our guys, and they can make sense of it’ because I can’t draw for shit! They brought it back and had their designers and stuff make everything proportionate and take the idea further.”

Another design change came in the way of the reverse headstock on his 7-string models, courtesy of Senior Master Builder Mike Shannon.

“That was a happy accident!” said Beaulieu. “The Jackson guys brought the models out to a show in Phoenix, and the 7-string had a reverse headstock which I did not specify or ask for. But on the 7-string when I saw it, I was like, ‘That’s perfect.’”

For 2020, Jackson rolled out refreshed signature models for Beaulieu with the Pro Series Signature King KV6Q and KV7Q models, which feature a richly resonant mahogany body topped with rippling quilt maple and finished off in a striking Winterstorm finish.

“Winterstorm just has a catchy, cool vibe to it,” said Beaulieu. “I like the name. I heard Winterstorm before I saw the paint job, and I was like, ‘Whoa! That sounds cool!’ Once I saw it, it was perfect.”

Both models feature a rock-soli maple neck with an oiled back finish.

“Once I had one with the unpainted neck, it was like night and day difference to me,” noted Beaulieu. “I couldn’t go back. It’s just feels so much faster and quicker. I always felt like my hand would get stuck on painted necks a little bit.”

Beaulieu has always held a fondness for Seymour Duncan® Blackouts® pickups for the high-output response and powerful dynamics.

“The Blackouts are amazing,” said Beaulieu. “I played a bunch of other active pickups and nothing has swayed me from wanting to play anything else. I know they make a bunch of different versions of the Blackouts, but I always just stuck with the original ones.”

Beaulieu praised the craftsmanship of his signature models, which consistently step up to the performance plate.

“I’m playing basically what you get off the shelf,” said Beaulieu. “Which says how well these guitars are made. I don’t have to bring out everything from the custom shop on tour because these are so well made.”

Watch Beaulieu break down his new signature Pro KV6Q and KV7Q models in the full video below.