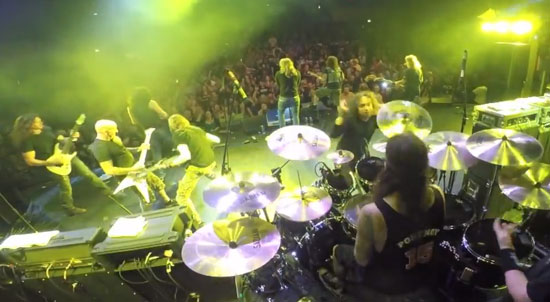 The lineup at the sixth-annual ShipRocked cruise was packed with hard rock and metal heavyweights like Limp Bizkit, Chevelle, Black Label Society and P.O.D., and that’s not to mention the supergroup of Metal Allegiance.

Comprised of members from bands like Anthrax, Megadeth, Testament and Death Angel, Metal Allegiance has put on a select few of their all-star jam sessions since originally meeting up last year on Motörhead’s Motörboat.

For a taste of their ShipRocked performance, drummer Mike Portnoy of the Winery Dogs set up a GoPro camera to his kit for a grand-finale version of Metallica’s “Seek and Destroy.”

Watch the footage after the jump.