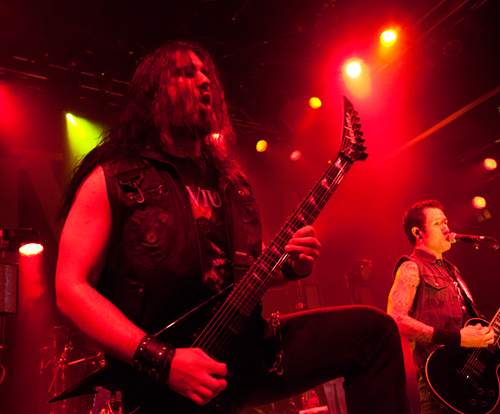 As their co-headlining tour with Devil Driver rolled through Hollywood this week, Florida metallers Trivium stopped at the House of Blues and nearly blew the doors off the venerable venue.

Trivium released their latest album Vengeance Falls on Oct. 15, so there was definitely a buzz surrounding this Sunset Strip show.  As such, a packed crowd began chanting the band’s name and moshing well before the lights finally dimmed and the quartet took the stage.

Once the video projection screen rose up, it revealed a setup that called to mind the futuristic artwork on the cover of Vengeance Falls – icy blues and blacks, with two huge chrome Trivium logos occupying each corner.

Led by drummer Nick Augusto, Trivium immediately launched into “Throes of Perdition,” a frenetic opener from their 2008 record Shogun that is driven along by a chest-thumping double bass drum.  Frontman Matt Heafy sang many of the melodic parts, while guitarist Corey Beaulieu threw in menacing growls.

Heafy and Beaulieu complimented each other well, creating a sonic wall with their dueling fretwork. Beaulieu really broke out with an aggressive take on “Becoming the Dragon” three songs in, with his riff causing hair to fly and heads to bang.

The first new track of the night came after “Dragon” in the form of “Brave This Storm,” a brutally heavy cut that features a searing solo from Beaulieu to incite even more mayhem from the middle of the pit.

Trivium was perhaps at their most brutal with especially crushing versions of “Kirisute Gomen” and “In Waves,” before Augusto beat out the familiar percussion sequence that kicked off the aggressive closer “Pull Harder on the String of Your Martyr.”

With Vengeance Falls, Trivium is now six albums into their career, and judging by Wednesday night’s confident and commanding performance, the band is really hitting its stride. 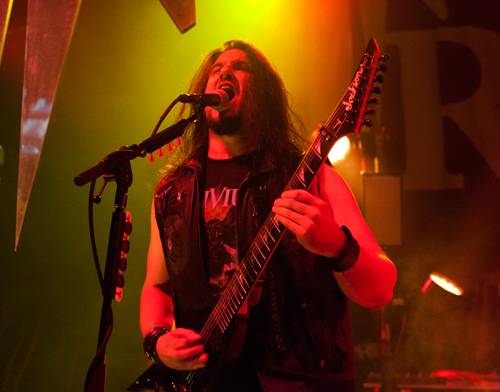 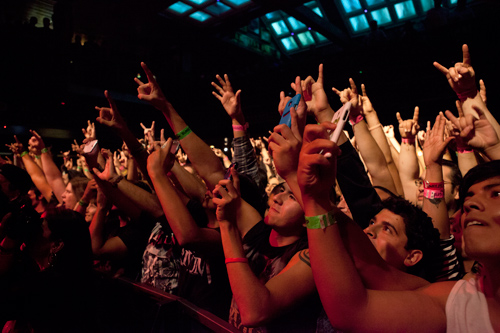