With Sleigh Bells’ sophomore album, Reign of Terror, set to come out soon (Feb. 21), anticipation of the noise-poppers’ release is high.

Derek Miller and Alexis Krauss have already been touring in Florida, and for those who are clamoring to hear the record, the New York Times has you covered with the first stream of all 11 tracks.

“The new record is unmistakably Sleigh Bells, with dense but bigger production that puts Ms. Krauss’s voice into sweet relief over Mr. Miller’s dark metal peals. It is even more guitar driven — Mr. Miller discovered a model, the Jackson USA Soloist, that he loves — and more narrative and lyrical, with a crisper focus on arrangements and harmony over beats. (On tour — they have sold-out dates in New York, San Francisco and Los Angeles this month, and are playing with the Red Hot Chili Peppers in the spring — they are joined by Jason Boyer on guitar.) They began recording “Reign of Terror” just days after the 14-month tour for “Treats,” which sold 149,000 copies, according to Nielsen SoundScan, solid for an indie debut.”

In other Sleigh Bells news, the duo is slated to play Saturday Night Live this weekend, and Spin is set to feature the band on it’s next cover.

Spin also has a great set of pictures from a recent Sleigh Bells show in Tampa.  Check them out here. 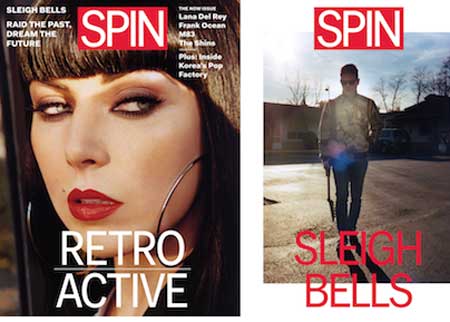