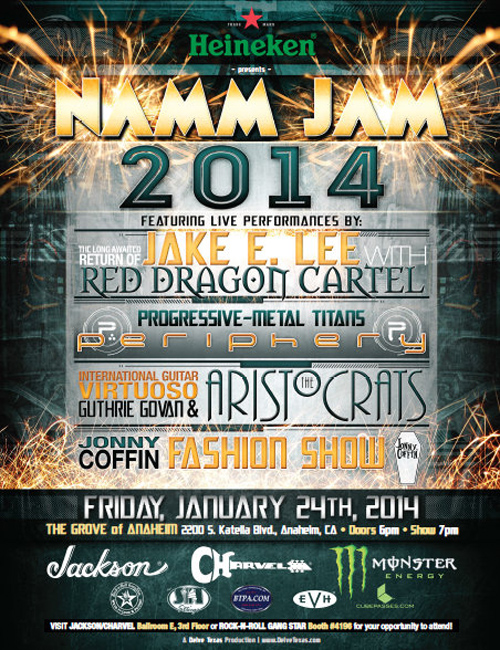 NAMM Jam 2014 will again stake its claim as a must-see event as part of the festivities surrounding this year’s NAMM Show in Anaheim, Calif., with progressive metal flag-bearers Periphery slated to perform.

Not only did Periphery gain lots of fans with extensive touring behind their 2012 album Periphery II: This Time It’s Personal, but the band also has an EP titled Clear scheduled to drop on Jan. 28.

In addition to Periphery, the legendary Jake E. Lee and his new project Red Dragon Cartel are on the bill, as are the Aristocrats.

Now in its fifth year, NAMM Jam 2014  is an invitation-only event that will be held at the Grove of Anaheim on Friday, Jan. 24.  Doors will open at 6 p.m., with the concert beginning at 7 p.m.

NAMM Show attendees who would like an opportunity to attend should visit the Jackson Showcase in Ballroom E on the third floor of the Anaheim Convention Center or Rock-N-Roll Gang Star in booth No. 4196.