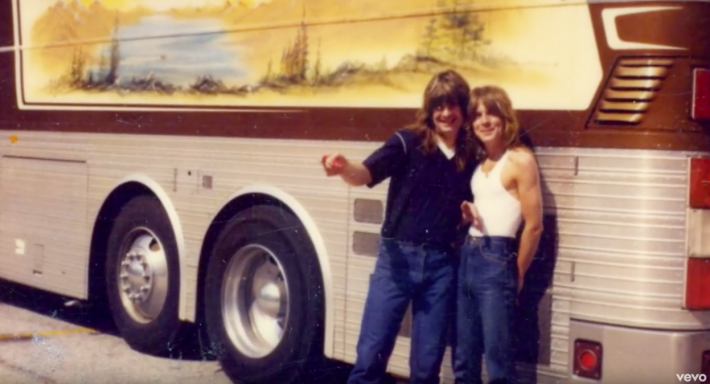 Ozzy Osbourne released a powerful music video for “Ordinary Man,” the title track of his recently released twelfth solo album. The emotional footage captured both the highs and lows of Osbourne’s incredible life and career, and included a few gems with his late-friend and original guitarist, Randy Rhoads.

The footage kicks off with Osbourne seated in a theater watching clips from his childhood in Birmingham, England, and then on to the early days of Black Sabbath. As the video progresses, the Prince of Darkness has a visibly sad reaction to footage of Rhoads performing live on stage and then standing next to each other in front of their tour bus.

While Rhoads is on screen, Osbourne fittingly sings, “I don’t want to say goodbye, when I do you’ll be alright — after all I did it all for you.”

Not pulling any punches, the Sharon and Jack Osbourne co-produced video also includes the former Black Sabbath star’s arrest mugshots, out of control drug and alcohol abuse and 2003 ATV accident where he lies motionless in a field.