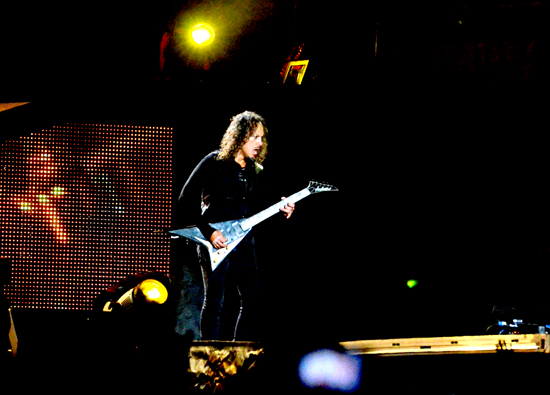 Amazingly, heavy metal legends Metallica had never before played the Outside Lands music festival in their native San Francisco, but that ended with Saturday night’s epic set on the Lands End stage.

Golden Gate Park was buzzing throughout the day to see the homegrown sons celebrate their recent 30th anniversary in one of the only venues they still had to conquer.

Metallica conquered for about 80 minutes, but that didn’t include a three-song encore. The Rock and Roll Hall of Famers pulled out several fan favorites, including “Master of Puppets” and “Fuel,” right off the bat.

“Fuel” even featured fireballs shooting out from behind the stage as frontman James Hetfield snarled, “Gimme fuel, gimme fire, gimme that which I desire!”

The group had two arms built from the regular headlining stage that allowed Hetfield, Hammett and Trujillo to walk out among the crowd at various moments.

And what could be called a “balcony” was set behind Ulrich as another raised stage that his bandmates played on.

Hetfield’s voice still has the sinister growl he’s always been known for, while Hammett took full advantage of his soloing opportunities with his furious speed.

Ulrich and Trujillo were fierce in establishing a throbbing backbeat.

It was easy to see that Metallica was eager to add another notch to their decorated career. Having performed at nearly every venue in San Francisco, Golden Gate Park was one last beast to slay.

The band did that with chest-rattling versions of “The Memory Remains,” “Hell and Back” and “Sad But True.”

Closing with “Enter Sandman” was a solid choice, as well, allowing the audience a chance to tap back into that mid-1990s music video on MTV.

Following a thunderous applause from the seemingly endless crowd, Metallica came back out on stage to rock three tunes – “Creeping Death,” “Battery” and “Seek & Destroy.”

By the time Metallica finished up, Icelandic band Sigur Ros was setting up their Twin Peaks stage for what would certainly be a large and unruly crowd.

But for those that attended Metallica’s Outside Lands show, there was no question that the fearsome foursome still dominate.