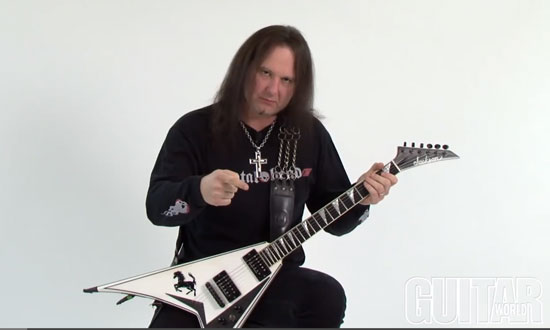 Former Halford guitarist Metal Mike Chlasciak recently announced that he is readying yet another edition of his annual Metal Heroes Academy, which focuses on grooming the next generation of metal artists.

The five-day summer camp is slated for August 24-28 at the Slide Mountain Forest/Full Moon Resort in Big Indian, N.Y.

Limited to those between the ages of 12 to 19, the Metal Heroes Academy will feature personal lessons, classroom sessions, all-out jams and a live concert to close out the festivities.

In other Metal Mike news, the shred-master also recently released a new lesson for Guitar World.

The episode, which is titled “Forgotten Scroll,” is about metal soloing techniques that fall outside what would be considered “normal” for the genre.

“I borrowed the name for this month’s column from an incredible album recorded by the band Apocrypha back in the late 80s, a very creative metal band that constantly pushed the limits of the metal genre to new and unexplored territories,” he wrote.

Watch the camp announcement and lesson after the jump.