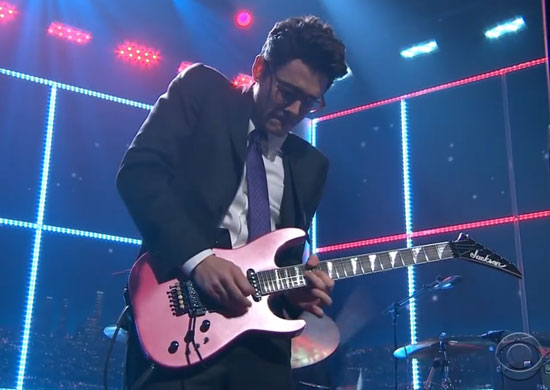 During a recent guest-hosting gig on CBS’ The Late Late Show before this year’s Grammy Awards ceremony, John Mayer brought his friend (and Grammy nominee) Ed Sheeran on the program for an interview and jam session.

The duo told some funny stories about tattoos and the difference between talk shows in Sheeran’s native U.K. and the U.S., but the real fireworks began when they picked up their guitars.

While Sheeran stuck to an acoustic guitar for a rendition of his single, “Don’t,” Mayer reached for a bright pink Jackson 30th Anniversary Soloist.

Mayer’s skills on the fretboard were never in doubt, and he certainly added another dimension to Sheeran’s funky track. Check it out after the jump.