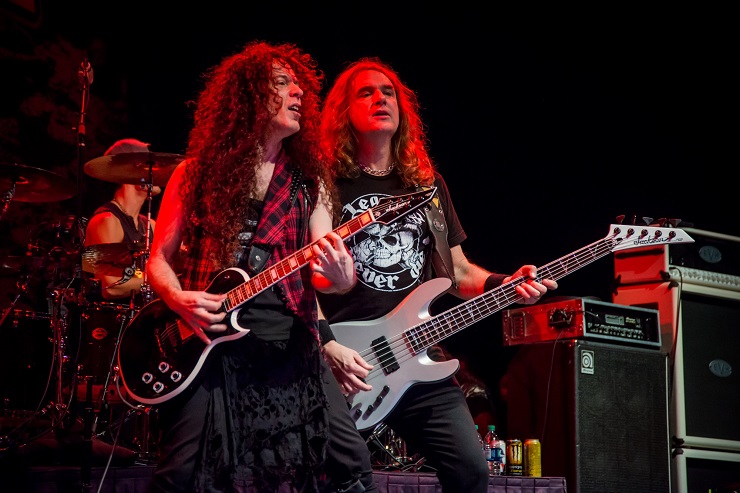 Several mega metal stars united Friday night for the annual Metal Allegiance show at the Grove in Anaheim, Calif.  Billed as a “Tribute to Fallen Heroes,” this year’s set list was designed to honor some of the iconic rock and metal legends no longer with us.

Gus G. kicked off the evening with a high-energy performance full of the precise, technical riffs and commanding stage presence he’s famous for. Lead singer Luna encouraged heavy participation from the audience, inviting them to sing along with the choruses and mimic the high-pitched squeals from Gus’s new Jackson Star guitar. Never skipping a note, this Greek guitar god’s incredible abilities were a spectacle to be witnessed.

Next up was legendary solo artist Marty Friedman, who huddled with his band center stage and then stormed across the stage with opening track “Hyper Doom.” It was a monumental set, highlighted by Friedman’s electrifying energy as he blasted through riffs and solos, only momentarily pausing to entice the audience for screams and cheers.

Mid set, Friedman stepped aside to give bassist Kiyoshi Manii a turn in the spotlight with a bass and vocal solo. Freidman then returned to the stage for a three song medley that included “Ashes to Ashes,” “Forbidden City” and “Tornado,” tearing it up with guitarist Jordan Ziff before ending the set with “Devil Take Tomorrow” and “Thunder March.”

As the night progressed, the lineup morphed into a series of artist mashups covering metal and rock classics. Tribute songs included David Bowie’s “Suffragette City,”  Ozzy Osbourne’s “I Don’t Know” in honor of Randy Rhoads and Megadeth’s “Peace Sells” to recognize Megadeth drummer Nick Menza who passed in May. Breaking the metal mold, a hard rock version of Prince’s “Let’s Get Crazy” was also performed for the late star.

Another notable performance included AC/DC song “Riff Raff” with Freidman returning to the stage with nearly the entire crew of metallers. Twenty songs later, the set came to a close with a rendition of Metallica’s “Seek & Destroy,” with all the evening’s performing musicians returning back to the stage for the grand finale. It was a truly legendary performance, celebrating the lives of the many fallen heroes that have inspired this group to create and continue to write their own legacies.

Experience a piece of the show with the live clip below: