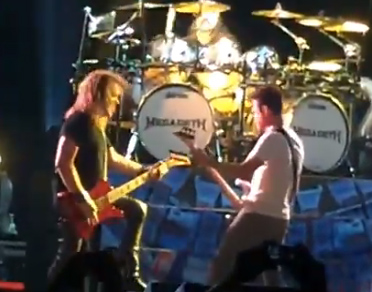 During a weekend stop in Dallas for Gigantour, Megadeth was joined on stage by an all-star cast to play a searing cover of Thin Lizzy’s “Cold Sweat.”

Megadeth actually included a version of “Cold Sweat” on their latest album Super Collider, but the addition of Slash, Zakk Wylde, Jason Newsted, Vinnie Paul and David Draiman made for a truly special moment.

As Gigantour rolls on, Megadeth has been busy, booking interviews and signing sessions in several of the cities they’ve visited.  For one, Megadeth scheduled a charity softball game this week in Oklahoma City, Okla., that will benefit those affected by the deadly tornados that ripped through the area in May.

In addition, bassist David Ellefson recently chatted with Jay Smith of Pollstar about his career and what’s been going on with the band.

Click here for the entire interview and check out fan footage of the star-studded “Cold Sweat” after the jump.