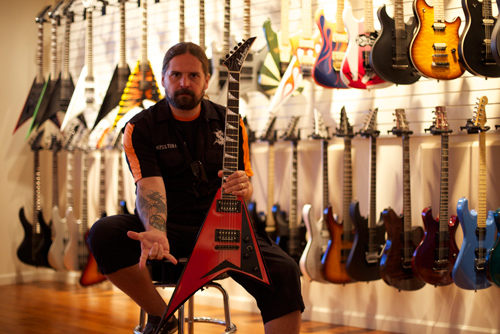 Brazilian metal mavens Sepultura are back in the studio finishing up work on the follow-up album to 2011’s Kairos. Guitarist Andreas Kisser kindly saved a few moments though to chat with JacksonGuitars.com about what’s been going on with the group and how he originally started on his path of being one of the world’s foremost shredders.

Read what he had to say after the jump.

JacksonGuitars.com: What can you tell us about working with producer Ross Robinson?

Kisser:  We’re working with Ross again after doing the album Roots with him in 1995, and since then, we hadn’t had the chance to work with each other.  We finally got the opportunity because we’re signed with Nuclear Blast after Roadrunner went away.  Many of those people that were with Roadrunner are now with Nuclear Blast.  So, old friends that used to work with Sepultura are now working with the band again, and that’s very exciting.  Ross is one of the best producers around for this style of music.  We know each other so well, and the stuff we are doing right now is really mind-blowing.  I’m really happy with it so far.  The guitars are mainly finished, as are most of the drums and vocals.  We’re pretty much on schedule. 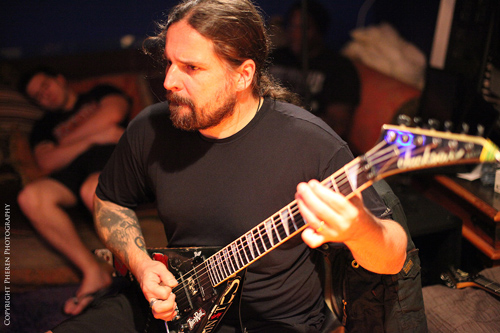 JacksonGuitars.com:  Where is the album at the moment?

Kisser: We have a rhythm of doing as much as we can before going in the studio, and so we had 90 percent of what we wanted to do going in.  Of course, we leave some room for improvisation, but basically, we pretty much know what we want to do once we go in.

JacksonGuitars.com:  We heard you’ve been working with Slayer drummer Dave Lombardo.  How did that happen?

Kisser:  Dave was with his dog and two kids walking around the beach, and he’s good friends with Ross.  He was in the neighborhood, and Ross said, “Why don’t you come by and play on the Sepultura album?”  He said, “Why not?”  It was amazing, man.  Two drummers, no cymbals.  With just the drums themselves, it sounded very heavy.  He’s one of our biggest idols, and it’s such an honor to have him with us on this album.  And the way it happened was so natural, like friends just coming together.

JacksonGuitars.com:  What direction did you want to take this album?

Kisser:  I write stuff all the time – riffs or ideas on an acoustic guitar.  But we really started working on this album in February of this year, so it was pretty quick.  We have Eloy Casagrande as our drummer, and he’s 22 years old.  The guy’s a beast.  One of the best drummers I’ve seen on the planet Earth.  He has this metal blood that has so much energy and brings so many possibilities for riffs and stuff like that.  It is a Sepultura album, but like every Sepultura album, there is something different.  I think the main difference now is the drummer.  It’s the first time we’ve worked in the studio with him.  It’s been almost two years [since the last album], and it’s very exciting.

JacksonGuitars.com:  You’re going to include a bonus track covering Death’s “Zombie Ritual.”  Why that song?

Kisser:  Without Death, there wouldn’t be a Sepultura — especially in the beginning.   The very early albums — like Morbid Visions and Schizophrenia — there’s a lot of influence from Chuck Shuldiner and his riffs.  You can hear that very clearly in our early music.  And we never really had the opportunity or idea to play that.  We really play our idols, like Black Sabbath or Motorhead and some Brazilian stuff, but because we covered so many different bands, I think it was time for this tribute to this great band.

JacksonGuitars.com:  What about the cover of the Chico Science song?

Kisser:  He’s one of the cultural revolutionaries in Brazil that really changed the way people portrayed the music of Brazil.  It was only bossa nova and samba, but in northeast Brazil, in the state Pernambuco — it is a poor region but very rich musically.  It’s amazing, with a very typical way of playing percussion and dancing.  They came [out] in the mid ‘90s with this music that was very unique, mixing the stuff from the local scene with heavy guitars and more Jimi Hendrix type of vibe, and lyrics that only he could do.  The way Chico sang was very original.  He died in a car accident when he was at the peak of his career, which was very sad.  The band is still going on and is a great band, but it lost a poet.

Who were some of your guitar idols growing up?

I started with KISS and Queen.  Ace Frehely, Paul Stanley and Brian May, I think they were my roots of rock and roll.  Then, of course, I started listening to Black Sabbath, Deep Purple, Led Zeppelin.  That trio – [Tony] Iommi, [Ritchie] Blackmore and [Jimmy] Page, along with Jimi Hendrix and Eric Clapton. But I also think that one of my biggest idols was Randy Rhoads.  That’s why it’s always a dream to be with Jackson and be in the Rhoads family.  I saw KISS in Brazil in 1983, and Vinny Vincent played the guitars that were supposed to go to Rhoads after he had recently died.  Vinny Vincent had all these beautiful guitars that were meant for Randy, so I saw Randy somehow through Vinny’s guitars.  That was cool.

When did you start playing guitar?

I started playing acoustic guitar, trying to learn the basic chords playing Brazilian popular music.  But, of course, I wanted to play rock and metal, play with distortion.  I never left the acoustic guitar.  I still study the acoustic and classical guitar.  I love that.  I think I was 14 or 15, maybe even earlier.  Then, I just listened to bands and tried to play like they did.  I trained my ear by doing that, trying to look for the notes on the neck, etc.  I love YES, as well.  Steve Howe, playing his stuff was great schooling for me.

From there, I had some high school friends who were into the same kind of music.  We formed our first band in school.  You know those science fairs they have in school?  We were doing a thing that was explaining heavy metal.  It was really something for us to have a chance to play.  Looking back today, we were doing something very modern at the time, because nobody knew about Metallica and Accept and Anthrax.  It was very underground, and they conquered the world.  In a sense, we were doing something very unique about something that really changed the cultural map around the world.  In a sense, [that band was] doing a scientific project.   It wasn’t just to make noise in school.  It was great.  It was the first time I stepped on  stage in my life.