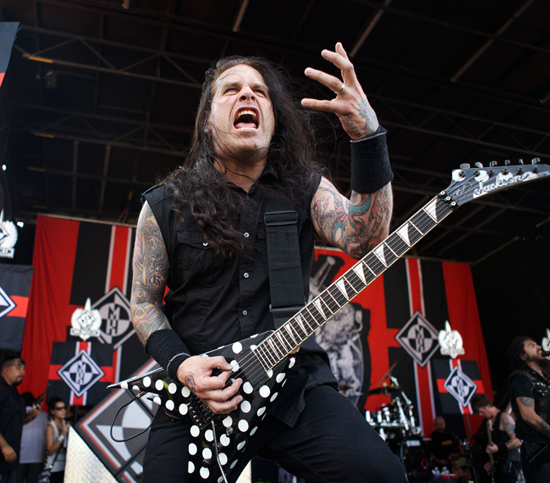 With temperatures going past the 100-degree mark in San Bernadino, Calif., Machine Head came out to a frothing crowd at the Rockstar Energy Mayhem Festival around 5 p.m.

As hot and tired as the crowd may have been, however, Machine Head left no choice but to rage even harder during a Jagermeister Stage set akin to a throat punch.

It was a momentous occasion for the band.  Not only was it the first day of the Mayhem Festival, but it was also the debut of bassist Jared McEachern, who recently took over duties for founding member Adam Duce.

In addition, the spitfire quartet was surrounded by an entirely new stage setup, which looked fierce with a red, black and white military theme.

Obviously, the powers-that-be at Mayhem recognized that it was a big appearance for Machine Head, as the band got an introduction by Theo Rossi (a.k.a. “Juice”) and Kim Coates (a.k.a. “Tig”) from the hit FX television series Sons of Anarchy.

With motocross riders from Metal Mulisha executing trick jumps off a ramp adjacent to the stage, Machine Head tore into a set that had fans screaming every word back to the band.

Beginning with “This is the End” from 2011’s Unto the Locust, guitarist Phil Demmel speedy riff was accentuated by frontman Robb Flynn’s commanding bark on the mic.

The quartet also reached back into their catalog, with the ominous “Old” from their 1994 debut album Burn My Eyes coming out two songs later.

As the pit nearly reached a boiling point in the middle of the dusty field in the shadow of the San Manuel Amphitheater, Machine Head closed with a particularly-powerful version of their 2006 hit “Halo.”

It marked a perfect cap to a chest-thumping performance for the Bay Area thrashers.  Even if it was quick, spanning only five songs and around 35 minutes, but Machine Head certainly left an impression on the metal fanatics.