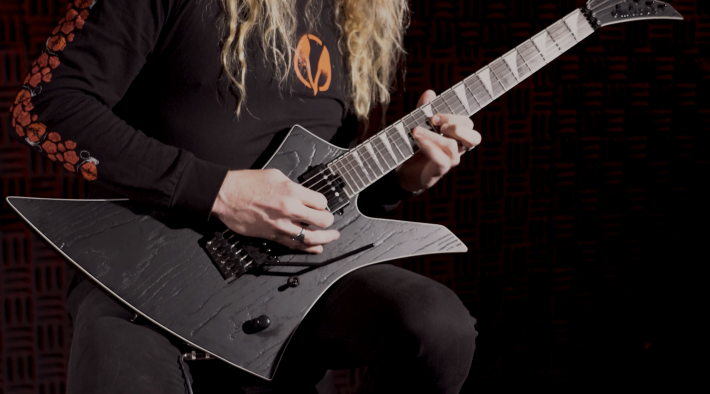 “I started playing Jackson guitars when I was really young, probably 13 or 14 years old,” said Loomis. “I had a Randy Rhoads Professional Series guitar that I got in a local music store in Wisconsin, where I grew up. I think it probably was due to Randy Rhoads, actually, that I started playing Jackson because I loved the aggressive body shapes and the style that it had to offer.”

Surrounded by music growing up, Loomis initially found himself behind a drum kit before discovering heavy metal and making the leap to guitar.

The popularity of Loomis’s USA model inspired the creation of a Pro Series version.

“You can see right off the bat it’s an absolutely beautiful guitar—it looks a lot like the USA custom and I applaud Jackson for the amazing work that they did!” he said.

The Pro Kelly’s assertive body shape was forged from basswood and capped with a sandblasted ash, while the through-body maple neck construction features graphite-reinforcement rods for enhanced stability.

“The playability and durability of my signature Jackson guitars are astounding,” said the Arch Enemy guitarist. “We tour so much and play 200 plus shows a year. We are constantly on the road and the guitar is constantly going through different climates and changes and stuff like that. What I have noticed about the guitar is the overall stability of it. It stays in tune perfectly. It’s extremely durable and the performance is 110 percent every night.”

“Jeff Loomis Signature Seymour Duncan Blackouts pickups are very aggressive and tight-sounding, which is the kind of style of music that I play,” Loomis shared. “I really like heavy pick attack, and these accentuate that.”