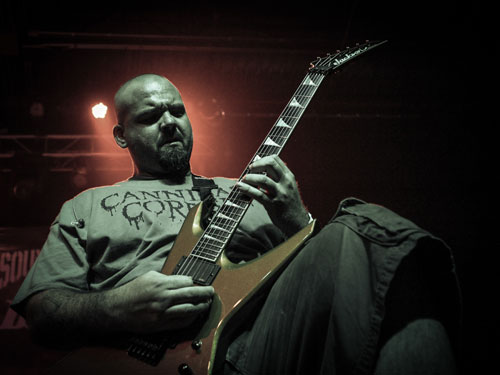 Wes Hauch, guitarist of Los Angeles-based metallers the Faceless, has had a whirlwind 2013.

The band went on an extensive tour with Dillinger Escape Plan through the first part of the year, and when he finally came off the road, he began working on some solo recordings.

Now, as the Faceless get set to go back out on tour with Between the Buried and Me, Hauch sat down with JacksonGuitars.com to talk about all of his recent happenings.

JacksonGuitars.com: How did you get hooked up with Between the Buried and Me?

Hauch: We did a tour with them last year, we did Summer Slaughter with them. They’re just buddies of ours, and we heard of about it late last year. It’s us, BTBAM and a band called the Contortionist – they’re great – and a band from the U.K called the Safety Fire. They’re like a proggy rock band. They’re cool.

JacksonGuitars.com: When you get off a long tour do you put your guitar away and decompress?

JacksonGuitars.com: Tell me about this solo thing. When did that pop into your head?

Hauch: I’ve wanted to do it for a while now, I’ve actually wanted to do it since before I joined the Faceless. It’s not a solo record in the sense that it’s like Steve Vai or Joe Satriani.  It’s going to have screaming vocals on it and everything like that, but its going to have a bunch of ambitious guitar work. My friend Martin Rygiel used to be in a band called Decapitated, and he’s going to play bass on it. I haven’t figured out exactly who’s going to play drums, but I’m hoping to at least get most of it done towards the end of the summer.

JacksonGuitars.com: Sounds like some of these ideas are pretty close to coming together

Hauch: I’d like to make it around a 50-minute album. I don’t know if I’ll get everything completely done. I’d like to finish most of the instrument stuff before we go back out again.

JacksonGuitars.com: What’s your writing process like? Do you start with a riff?

Hauch: It usually starts with something I’m messing around with. I’ve been working with a new strategy, because in the past I would sit there and write stuff and record it and think, “Man, I don’t like that,” and then start over.  I would just end up going in circles and not really get anything done.  Now, whether or not I think it sucks at the moment, I just record it anyways and then I’ll listen to it a day later.  A lot of times, something that’s kind of cool comes out of it. That’s helping out a lot. Eight of the songs have been around for a while, and it’s just stuff that doesn’t really fit into the Faceless vibe. So yeah, I’m just stoked to just put it out.  I’m not entirely sure if it’ll come out on a label but I just want to put it out and see what happens

JacksonGuitars.com: With BandCamp and sites like that, do you think it’s easier to get your music out there?

Hauch: Yeah, and, I mean, you can almost build your own campaign for your record with YouTube and other venues, which is something I’m eager to do because I haven’t done that much video content.

JacksonGuitars.com: What gear have you been been using recently?

Hauch: I have a SL-1 in silver that’s my main live guitar and my main guitar at home as far as the six-string stuff goes. I have a WR-1 that I have as a backup – that’s a great guitar.  Both of those have Seymour Duncan’s in them. For my amp, the preamp sounds, I have an Axe FX II. From there, that just goes to like a 16-channel mixer that we all have an in-ear mix out of. I don’t have any cabs on stage. I might want to change that soon. I really like the EVH stuff. So I’m thinking about using the Axe effect with that. Getting some stuff going.

JacksonGuitars.com: How did you get into being a guitar nerd?

Hauch:  My dad was always into guitar stuff like Stevie Ray Vaughn, John Lee Hooker and Pink Floyd – really, everything.  So I grew up hearing a lot of that stuff, and I always thought was pretty cool. I that was my first “bendy guitar lead” kinda stuff that I was exposed to. And then I got into like Pearl Jam, Nirvana, Soundgarden, all of those bands, and then it was punk rock. By the time I was in leaving Jr. High, I started listening to metal. One of my friends had all the Anthrax, Sepultura, Pantera stuff, and that kind of changed everything from there.  It was like, “OK, you’ve got to practice.”

The thing I love about metal, rehearsed music in those genres, is it’s a bunch of dudes spending a lot of time getting technically good at their songs. Especially, dudes like Marty Freeman and all the early Jackson guys. Those were big ones for me. It’s cool to be at Jackson now, too, with all that to say about some of my favorite dudes being Jackson guys when I was a kid.

JacksonGuitars.com: Aside from the upcoming tour, what’s on the horizon for the Faceless?

Hauch: After that BTBAM tour, were going to Australia and were doing a support, we’re doing like five or six shows supporting Nile. That’s really cool. Then we have talks of going, it’s not confirmed, but we have talks of going to another couple countries. We’ll see if it pans out. After that, we’ll either do another tour in the states, or we’re going just go start writing a new record. I’m looking forward writing new things to because, I’ve been in the saddle now for a year and a half and I’ve got a bunch of ideas. So, getting it recorded or seeing if it’s going to work is going to be fun.