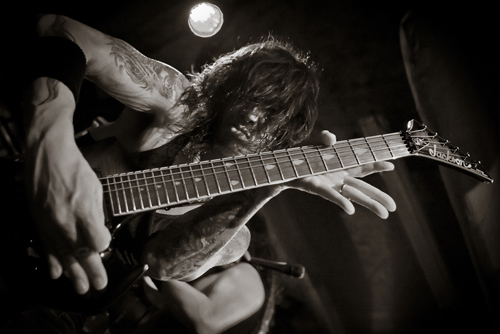 Death Angel has a new album called The Dream Calls for Blood coming out on Oct. 15 in North America (Oct. 11 in Europe), and by all accounts, it is just as brutal as their acclaimed 1987 debut The Ultra-Violence.

Much of the material was written while on the road for a three-year tour in support of 2010’s Relentless Retribution, before the band recorded at Audiohammer Studios in Sanford, Fla., with producer Jason Suecof.

Now, Death Angel is ready to bring their new tunes to the masses, and JacksonGuitars.com caught up with guitarist and founding member Rob Cavestany to find out what’s up with the thrash legends.

JacksonGuitars.com: What was the process you guys went through when recording this new album?

Cavestany:  I wrote most of the music on the road when we toured our last album, which is something we hadn’t normally done.  That tour was three years long, so it was insane.  It was going so long, and I usually don’t write much on the road, but I had to because it was going to take too long.  But because of that, we got in a groove.  The original plan was to do two albums back-to-back, but we didn’t know that the tour would be three years.  We followed through by continuing to write on the road, and because most of it was written like that, this new album has a live feel to it.  It’s one of the heaviest we’ve done, at least to me, like The Ultra-Violence.  This one is definitely aggressive.

JacksonGuitars.com:  Were there any songs that you were able to complete and test out live while you were on tour?

Cavestany:  We didn’t test any of the songs on purpose, and it’s basically due to modern technology.  You know, if we’d play a new song live, it’s hitting the Internet that night.  And really, we do a lot of spontaneous things when going through the writing process, re-arranging things along the way.  So they might not be finished products.  We didn’t want bogus versions of the songs leaking in a way they weren’t supposed to be heard in the first place.  But we did play a number of them instrumentally during soundchecks, so people may have heard some new stuff and not known it.

Another cool thing that has affected the album by writing on the road is that a lot of it comes from a really dark place, which is good for metal.  The grind of being on the road and the excitement of being on tour, that’s all in there.  The writing was influenced by that, and we wanted the recording to have that vibe, too.  So we wrote right up to the recording time, almost too close for comfort.  After the last show we did in Europe, I flew home, did some laundry and in three days I was flying to Florida for two months to record.  We wanted to have that vibe without resting after coming off tour.  It was killer, even when it was killing us. [laughs]

JacksonGuitars.com:  We read that you had a more active role in the production of this one, along with producer Jason Suecof, right?

Cavestany:  With Relentless Retribution, I had some help in the studio with the pre-production stuff, but this time, I did the pre-production in our home studio in Oakland.  Once we got out to Florida, it was more so working on the vocals and the solos.  It’s so much fun to work with another killer producer.  I like teaming up with someone so there’s another set of ears that you respect, someone that you can fight with and collaborate at the same time.  At some points in time, we were so efficient.  Mark [Osegueda, singer] would be in one area recording vocals with Jason, and I’d be in another studio recording solos.  We really utilized all the hours we had.

JacksonGuitar.com:  How do you write with having another guitarist in the band?

Cavestany:  With this band, the normal and natural way that it has worked for us is I just write.  Ted lets it flow out of me, and thank God!  He’s a killer team player and a killer guitarist – my right-hand man.  When it comes to writing, he says, “Just go for it.”  Sometimes all the guitar parts are all there, and sometimes it’s just one guitar and he’ll learn what I’m doing first so he can come up with some ideas, like harmonies or polyrhythm parts.  A lot of our rhythms are meant to be going at the same time, so it’s powerful and in unison.  It works for our sound.

JacksonGuitars.com:  What gear did you use on the album?

Cavestany:  I’m proud to say that I straight up use my Jacksons on all the electric guitars for this album.  Even though I could have used other guitars to add textures like I have in the past, I just wanted to use my custom Jacksons on this one.  It’s either the one I call the Blue Dragon or the Red Dragon.  But, I almost forgot that I used a Dominion, which is Mark Morton’s signature guitar.   It has a great biting tone that got used on some of the parts.  I can’t believe I almost left that one out!  It got sent to me when we were on tour one time for playing backstage, so I’ve had it with me for a while.  I actually wrote a lot of the album on that guitar.  It doesn’t suit me live, but it’s another killer guitar, of course.

JacksonGuitars.com:  How did you get involved with Jackson? 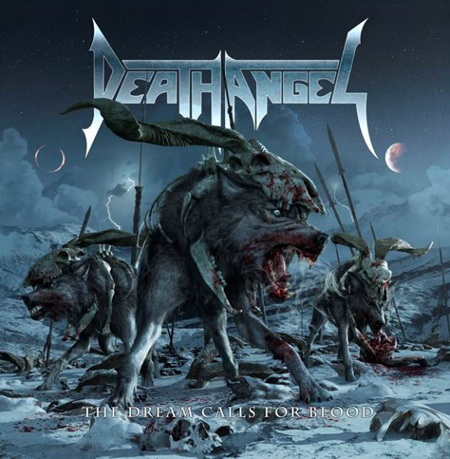 Cavestany:  I’m sure a lot of people say this, but Randy Rhoads was my total idol, and he played a Jackson.  I saw that when I was a kid, and that’s what really made me serious about playing guitar.  I needed to play what Randy did.  Eventually, I got my first Jackson, and I loved it from the moment I started.  It’s been with me since our first album in 1985-86.

I got lucky, because our manager back then knew Grover Jackson at the time.  He connected me, and we totally hit it off.  He was so nice, and I was in awe of this man because he worked with Randy.  Next thing I know, we’re talking about guitars.  I told him I had this idea for a shape that I had been drawing on napkins forever.  It had the shark’s fin of Randy’s guitar, but the bottom has kind of a Star body – my first Jackson – and one of the wings has an SG cut for easy access to the higher frets.  We went over it and perfected it, and Grover gave me that in 1988 or ’89.  To my knowledge, Randy Rhoads and I are the only two guitarists to do that with Grover Jackson.  Apparently, he did his on a napkin, too.  That fact alone puts me on a cloud for the rest of my life.

JacksonGuitars.com:  Is there another three year tour in the works for Death Angel?

Cavestany:  We’d better not [laughs].  I don’t know how many times you can tour for three years in a row and not take a break.  If I do, I might not have a home to come back to at that point!  So no, but we do plan on playing as many shows as possible. It’s kind of a contradictory situation, because if tour offers keep coming in, we’re not a band to say no to playing killer shows.  You never know, so we’ll see how far we can take it.  But I know how taxing it is on your life, and I also want to start working on the next album sooner than that.  Maybe we’ll see if we can pack all those shows into a year and a half.