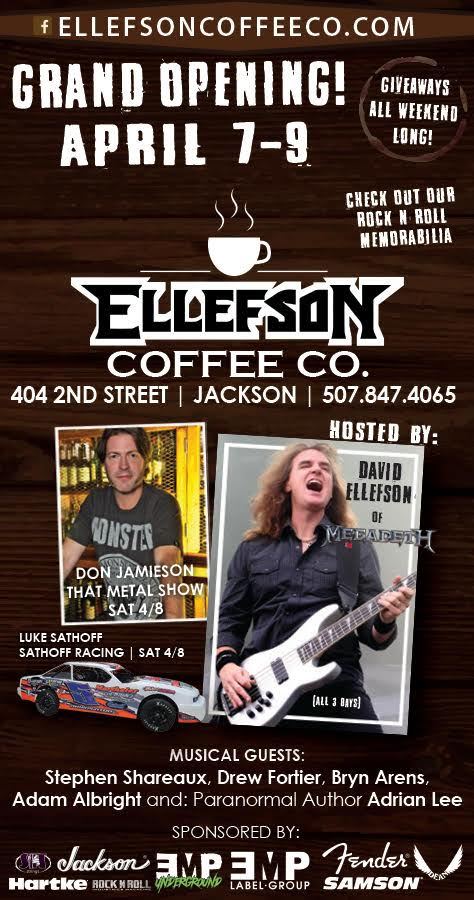 Grammy-winning Megadeth bassist and Jackson signature artist David Ellefson is gearing up for the grand opening of his boutique coffee store, Ellefson Coffee Co. in his hometown of Jackson, Minn.

The store will serve and sell a variety of Ellefson’s custom coffee blends, which include Roast in Peace, She Wolf, Kenya Thrash and Urban Legend. In addition, it will also be a retail outlet for titles and merchandise from Ellefson’s EMP label group, as well as a dealer for Jackson guitars, Sit Strings, Puck Hcky and more.

“As the grand opening draws nearer, it’s amazing to see the excitement build and be able to announce some more killer things we have planned for the grand opening and beyond!” exclaimed Ellefson. “We have people traveling from all over the country to join us in this celebration of all things coffee and metal, and we’re going to show them all a great time!”

“The Ellefson Coffee Co. store has turned out to be an amazing way for David to have a permanent face in his hometown, while being able to tie in EMP, Jackson, Dean, SIT, and everything else in our universe,” added ECC Marketing Director Thom Hazaert. “With the huge sense of Megadeth history in Jackson, we are excited to be able to create a really unique and amazing fan (and Coffee) experience, that, as predicted, is turning out to not only be a highlight for the people of Jackson, but a destination for Megadeth fans from around the World.”

Take part of the celebration or pay a visit by Ellefson Coffee Co. at 404 Second St, Jackson, Minn., 56143. More details at ellefsoncoffeeco.com.