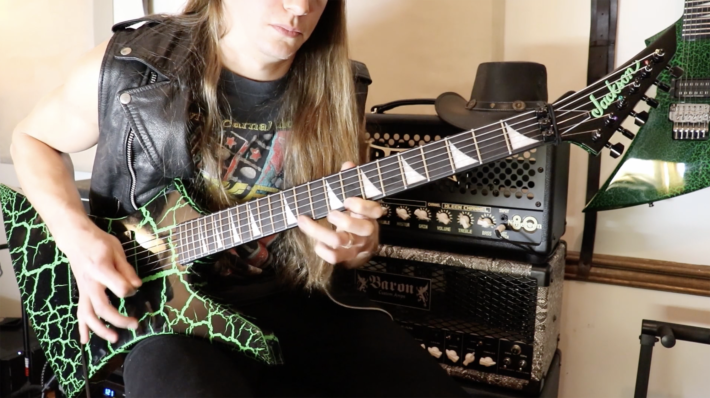 Today marks the official release of the Pro Series Signature Brandon Ellis Kelly™ and we’ve got an exclusive new video in which the Black Dahlia Murder guitarist takes a deep dive into all of its features.

“This is my first signature guitar and it’s a huge honor to me to work with Jackson and to offer this as a production model,” Kelly says in the video below. “It’s based on my custom shop Kelly which is the guitar I ordered when I first teamed up with Jackson. I went with the Kelly body shape because of course it’s classic Jackson, and I really wanted to represent that. The sharp contours really embody the whole attitude that I like to put into my guitar playing. It looks pure metal.”

“I have never seen this pickup offered on a production guitar so that’s really cool,” says Kelly. “It’s designed specifically for guitars with Floyd Rose tremolos. On each side of each string, there are actually two pole pieces that run parallel, which creates a really precise magnetic field and you just get a really high-clarity, hifi kind of sound out of it.”

Ellis also elaborates on why he bypassed a neck pickup.

“I’m really going for that heavy metal, rich overtone, searing harmonics thing and the bridge pickup is where I find my tone,” he explains. “I’d also be lying if I didn’t say it was paying homage to Eddie Van Halen. If Eddie didn’t need it, I don’t want it.”

As distinctive as its namesake, the Pro Series Signature Brandon Ellis Kelly comes in a standout Green Crackle finish with black hardware and a reverse pointed 6-in-line black headstock with green Jackson logo.

“I’m a diehard fan of the crackle finishes,” says Ellis.  “It’s just awesome. It was around in the ‘80s and then you couldn’t get it for decades. I used to collect these old guitars, but now it’s back in full force and I’m really psyched to be able to offer this.”

See more from Ellis as he plays his new sig monster and gives the full rundown of specs in the video below. Also, to commemorate today’s launch, Ellis is taking over the Jackson Instagram account (@officialjacksonguitars) and will be live tonight at 7PM EST.