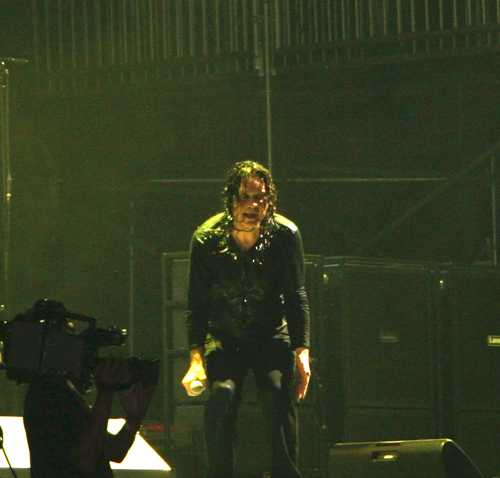 Black Sabbath might have been going up in a headlining battle against the heavy-drawing Black Keys Friday night at Lollapalooza, but the godfathers of heavy metal may just have come out on top.

Playing in the same time slot opposite the Keys, Sabbath made their return to the United States in epic fashion, playing a menacing 17-song set that showed a huge crowd they still had it.

Ozzy Osbourne’s voice obviously wasn’t in its prime, but he was an impeccable showman. Guitarist Tony Iommi had to take time off this summer while recovering from cancer treatments, but his axe was all fire. And bassist Geezer Butler’s weapon of choice brutally attacked the lower register.

The one main difference was the absence of longtime drummer Bill Ward, who is not with the band over a contract dispute, but Tony Cluefetos more than ably filled in.

Cluefetos was even given a spotlight in a mid-set drum solo that pounded away for minutes before segueing into “Iron Man.”

That was just one of the hits Sabbath brought out in their only North American stop scheduled this year.

From the first notes of set opener “Black Sabbath,” the audience was all-in.

They were rewarded with “The Wizard,” “Snowblind” and a “War Pigs” that was simply mesmerizing.

The sirens that herald the start of “War Pigs” brought goosebumps, as did the black-and-white images of old war footage that played on the giant screen behind Cluefetos. Osbourne even traded lines with the crowd before taking the reins.

Osbourne, who was constantly exhorting the crowd to get louder and louder, despite the constant roar thrown at the stage.

The “Ozzman” also garnered a laugh during “Iron Man” when he ran over to the enthusiastic woman translating the performance into sign language for a quick kiss.

Black Sabbath closed with “Fairies Wear Boots,” “Dirty Women” and “Children of the Grave,” leaving one obvious song off their setlist.

Even though he didn’t need to, after the band walked off stage, Osbourne himself began the requisite “One more song!” chant, paving the way to an electric “Paranoid.”

Had Sabbath not played “Paranoid,” the crowd should still have been pleased at what the legends offered.

But it was sure a nice exclamation point to put on a triumphant night.