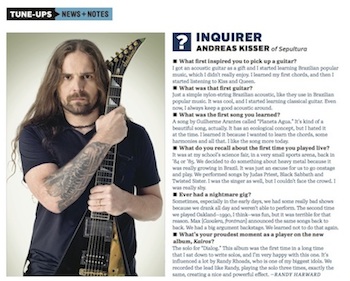 Andreas Kisser, lead guitarist for Brazilian heavy metal band Sepultura, was featured in the February issue of Guitar World magazine, where he talked about the band’s new album, Kairos.

When asked what his proudest moment on the new album was, the Jackson artist said it was his solo on “Dialog.”

“This album was the first time in a long time that I sat down to write solos,” said Kisser. “It’s influenced a lot by Randy Rhoads, who is one of my biggest idols.”

Listen to “Dialog” below:

Get your copy of Guitar World here to read the rest of the Q&A, and check out Sepultura’s official website for tour dates and more information.