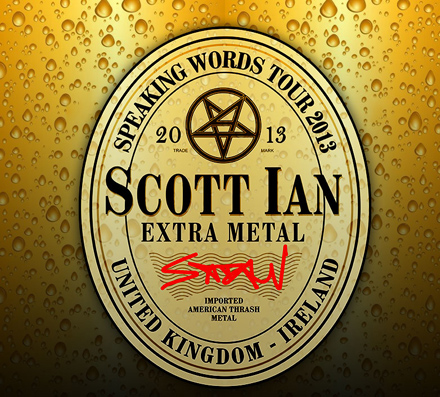 Anthrax guitarist Scott Ian is getting set to kick off the “Speaking Words” tour of the U.K. with 16 dates throughout May and June.

Beginning May 24 in Oxford’s O2 Academy, Ian’s trek will include personal stories and tales from his 30-plus years as a musician. In addition, Ian will participate in a Q&A with fans.

“It’s something I’ve always wanted to do, and I’ve always been trying to figure out how can I do this, how would I ever make this possible,” he told Decibel magazine.  “I’ve seen [Henry] Rollins do it all these years; I saw Rollins, maybe on the first time he ever did a tour I went to see what it was going to be about. I mean, I am a huge fan of Rollins’ music and I had read all his books at the time, so I really knew that he had a point of view and something he needed to express and he did it really well. It’s something that I always wanted to do and I finally had the opportunity this year; doing this one-off show in London. I was approached by the band’s agent, who basically put it together, and asked, ‘Are you interested in doing this?’ And I said, ‘Absolutely. I’ve been kind of waiting for this to happen but I didn’t know how to kick-start it.’

“I did the one show in London and I enjoyed myself so much, I had such a good time with it that I was like, ‘Can I do more of this? How do we do more of this?’ They came back and said, ‘There’s a lot of interest in it, do you wanna do a tour?’ I was like, ‘Sign me up! Let’s find a window when it works and go and do it.’”

Watch a teaser video for the tour after the jump and click here for a full list of dates.