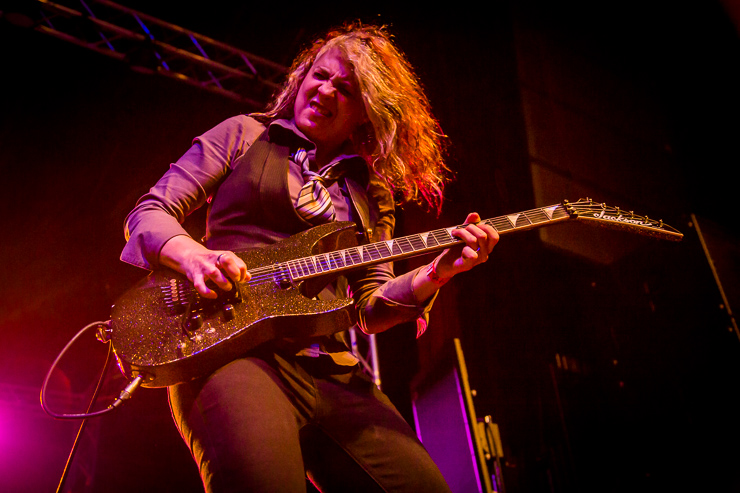 Fans and metal icons gathered together Saturday night during the 2016 NAMM Show to honor one of the genre’s most legendary guitarists at the “Randy Rhoads Remembered: A Celebration for a Guitar Legend” concert at M3 Live in Anaheim, Calif.

Founded in 2013 by former Whitesnake drummer Brian Tichy and his producing partner Joe Sutton, the event is aimed at recognizing the incredible contributions of the late Ozzy Osbourne guitarist, whose life was tragically cut short at the young age of 25.

Jackson was honored to sponsor the third annual star-studded evening, which featured several iconic metal and hard rock artists performing some of Osbourne’s greatest hits, including “Crazy Train,” “Little Dolls” and “Diary of a Madman.”

It was only natural that several Jackson artists were on hand to pay tribute to the man who helped design one of the company’s most iconic shapes. Armed with a black and white polka dot Jackson Rhoads model, Machine Head’s Phil Demmel teamed with Rudy Sarzo and Jeff Scott Soto for “I Don’t Know” while Act of Defiance’s Chris Broderick partnered with Neil Turbon and Sarzo for “Paranoid.” Megadeth bassist David Ellefson also made an appearance, crushing Osbourne’s “Steal Away (The Night).”

Other notable moments included a performance of Quiet Riot’s “Back to the Coast” by Rhoad’s brother, Kelle, joined by Sarzo on bass and guitarist Janet Robin. Robin, who plays with Lindsay Buckingham, actually took guitar lessons as a kid from Randy Rhoads at the Musonia School of Music in North Hollywood.

Another young female artist, Lexii Lynn Frazier, also got to demonstrate her onstage chops with a flawless rendition of “Crazy Train” after winning a contest.

Kelle and his sister, Kathy Rhoads, paid touching tributes throughout the night to their late brother and also their mother Delores, who died in November 2015. Then, to end the emotional and triumphant evening, the siblings presented the first ever Randy Rhoads Legend Award to Sarzo. With his family and a few hundred of his adoring fans in the house, Rhoads’ spirit was undoubtedly present.