Greetings from England’s green and pleasant land, where your trusty Jackson reporter landed this morning! As I’m sure you know, the 2010 Download Festival kicks off tomorrow, and myself and the team are chomping at the bit to get there for what promises to be a truly memorable weekend of world-class ass-kicking metal.

Is it Live or is it Memorex?

If you’re a natural-born cynic like me then you’re probably thinking “This guy’s probably not even over there; he’s blogging this in his underwear from a basement in Arizona and is just stealing photos and festival updates from the web.” Awful mental image aside, if you suspect that, I promise you that over the next few days you will see photos and video clips from Download and elsewhere that will, as Prong once said, “prove you wrong!” And here’s one to get that started, taken just a few minutes ago … 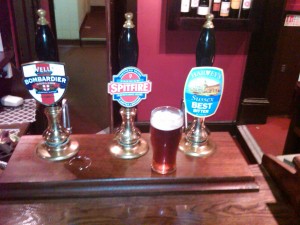 Photographic proof that Budweiser is not the king of beers!

I challenge you to find that shot on the web or at a so-called “English pub” in the United States that boasts that fine an array of hand pumps! Anyway, the real fun starts tomorrow.  Here’s a shot of a few Download essentials …

And as for the build up to the World Cup and what it’s like over here, can you say “football fever”? You can literally feel the excitement mounting. The TV coverage is insane; the papers are full of it and English flags are everywhere – on cars, in pubs, on shirts, on houses, on cereal packaging, pint mugs and even painted on faces! The fact that the English team’s first game is against the United States on Saturday, during Download, adds further to this classic trip — the reaction to that game and its outcome will definitely be reported in this blog!

Here’s some World Cup-related stuff you’d be hard pressed to find in the United States … further proof that I’m on this side of the pond.

The above: English beer (essential at all times, whatever the occasion), pork scratchings (like pork rinds but really unhealthy), tabloid coverage and countdown to the U.S.A. game, British key ring and car flag.

As previously noted, the real fun begins tomorrow. Mr Demmel lands; then we’ll have breakfast, drive up to the festival, pick up some essential items on the way (namely Wellington Boots —  just like Paddington Bear wears. We have no choice though — it’s been raining here all week, so we predict a mud bath!) and get ready to rock out with the likes of Unearth, Job For a Cowboy, Killswitch Engage, BFMV and AC/DC. Tough gig, but someone’s gotta cover it. Stay tuned …