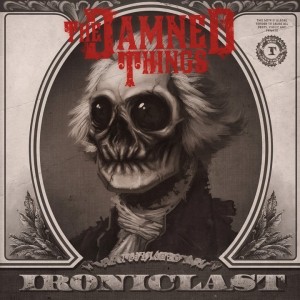 If you love lasers, costumes and fake blood, you’ll love the video, written and directed by Metalocalypse creator Brendon Small (the Damned Things guys are all big Metalocalypse fans) based on an idea by Patton Oswalt. Just watch as Damned Things guitarist and thrash godfather Scott Ian pulverizes the bad guys with his silverburst Jackson Soloist.

The Damned Things are undoubtedly a musical force to be reckoned with, comprising members of Anthrax (guitarists Scott Ian and Rob Caggiano), Every Time I Die (vocalist Keith Buckley) and Fall Out Boy (guitarist Joe Trohman and drummer Andy Hurley). While everyone in the band has experienced his own considerable successes, the debut album displays a love for classic rock anthems and powerful melodies with heavily metallic intensity that turns out to be much more than the sum of its parts.

“All of us came together as people and musicians incredibly smoothly,” Ian said. “If we had to force any of the parts, this wouldn’t have happened. It was kind of like our dream scenario … but it actually worked. It’s one of those few-and-far-between situations.”

The Damned Things are slated to hit the road in early 2011, with Ian wreaking onstage havoc with his Jackson Soloist models at album release shows at the House of Blues in Chicago on Dec. 12 and at Rebel in New York on Dec. 13. A Jimmy Kimmel Live! appearance is also scheduled for Jan. 13, so set your DVRs accordingly.