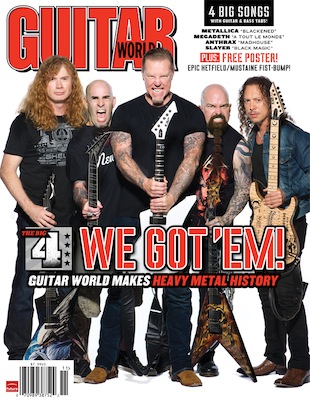 Aside from a killer Big 4 cover and pull out poster, the November issue of Guitar World magazine featured a tell-all interview with Megadeth frontman Dave Mustaine and lead guitarist Chris Broderick.

The two discuss their dynamic as guitarists, as well as as details on how they got as good as they are now.

There’s a reason why Broderick takes on the harder tasks, and that’s because as a teenager, he told Guitar World he really had no life other than practicing guitar.

“It was pretty tortuous, actually, this self-imposed ‘I want to be the best’ thing,” said Broderick.

You could have read more in the Nov. issue of Guitar World. But if you didn’t get a chance to pick it up, get your copy here.