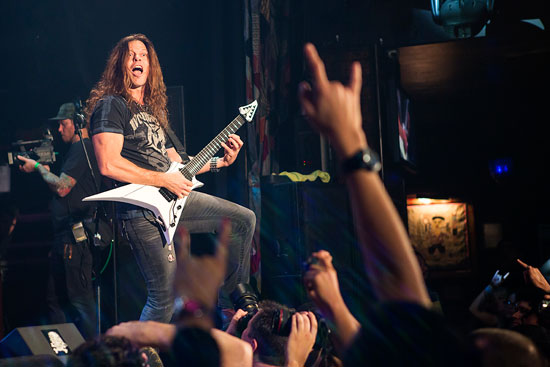 Some of the most legendary names in thrash and metal came together Wednesday night at the House of Blues in Anaheim, Calif., as the first Metal Allegiance show on solid ground rocked a raucous crowd.

Considering that the event coincided with the 2015 NAMM Show, the Anaheim streets were buzzing with metalheads eager to see many of their heroes on stage at the same time. The artists themselves shared a similar excitement.

The camaraderie between each musician was clear, as each guy traded hugs and fist-bumps as they subbed for each other. It makes sense, too, because the seeds of Metal Allegiance were planted many years ago.

Broderick recalled how he began playing with Ellefson and Bello during some bass clinics a few years ago.

“They started jamming with other people and called it ‘Metal Masters.’ And as it progressed, more and more of us came into the fold,” Broderick said. “The first time I came in was such a great time, just to get together with these guys and jam. I look forward to it every time we do it.”

The Metal Allegiance show kicked off with Sanders, Benante, Bello and Ian performing “March of the S.O.D./Sargent D and the S.O.D.” by Stormtroopers of Death (a band that featured Banante and Ian). The thrash staple whipped the crowd into a roiling boil right from the start, as a pit formed just in front of the stage.

Some might think that choosing the proper setlist would be a challenge, but according to Ellefson, that’s one of the things that makes Metal Allegiance so enjoyable.

“It’s just like we’re teenagers sitting around in the basement trading records,” said Ellefson. “We had to brush up on a few tunes, but for the most part we know all the songs. It’s like having the world’s greatest party in your house.”

“I always say, ‘If I have to learn a song, I’m not doing it.’ Then it becomes work! I just want to go have fun,” he said. “I requested ‘Murder in the Rue Morgue’ by Iron Maiden because I was tired of playing ‘Ides of March’ and ‘Wrathchild’ every time. I was really excited to play that one because I don’t think I’ve played that live since Anthrax was still doing covers in like ’81 or ’82.”

The audial assault continued into the night, as Van Halen’s “Runnin’ with the Devil” (Sanders, Skolnick, Ellefon, Portnoy) reared its menacing head, and then Skolnick blew the roof off the venue with a spot-on take on “Eruption.”

As the clock ticked towards the wee hours of the morning, every member of the Metal Allegiance ensemble picked up their instruments for a KISS send-off, rocking the standards “Cold Gin” and “I Love it Loud.”

With a mixtape that served as a soundtrack for all metal enthusiasts out there, the Metal Allegiance performance was truly something to behold in person.