On the week of one of the most highly-anticipated concerts in decades, The Big 4, featuring Metallica, Slayer, Megadeth and Anthrax, Megadeth have announced the remaster and release of their legendary ‘Peace Sells… But Who’s Buying?’. 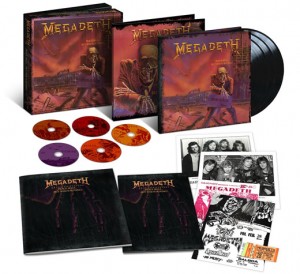 The commemorative 25th Anniversary release will be available in multiple configurations on July 12 by Capitol/EMI. All of the versions, including a 2CD lift-top box, digital album, and a deluxe 5Disc+3LP box set, include a previously unrelesed 1987 concert from the band’s first world tour and new liner notes written by Megadeth’s Dave Mustaine and Metallica’s Lars Ulrich. For more information, go to www.megadeth.com.