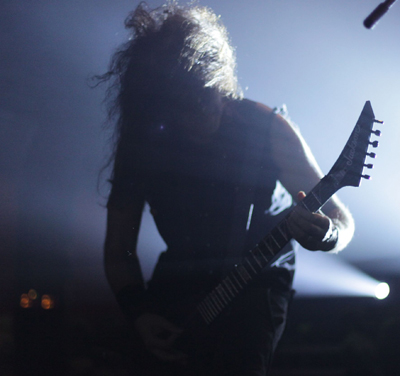 After 13 studio albums, Kreator definitely has a broad catalog to draw upon during the German thrashers’ current Teutonic Terror Attack tour.

But this week at the Avalon in Hollywood, Kreator’s fans responded just as heartily to the new tracks off 2012’s Phantom Antichrist just as much as classics like “People Lie” and “Extreme Aggression.”

An eager crowd came out to the the 2,000 capacity Avalon, with metalheads looking to see both Kreator and co-headliners Accept.

By the time Kreator’s night-capping set came, the audience was already primed from Accept’s high-energy show.

When Kreator frontman Mille Petrozza walked out around 9:30, the stage was lined with the zombie-themed artwork from Antichrist.  Fans raised their horns and started a whirring pit in the middle of the venue as he launched into two songs from the album, the title track and “From Flood Into Fire.”

Deep red and blue lights lit the backdrop as strobes peppered the senses throughout the set.

Petrozza made use of the entire stage, singing from his central microphone mostly, but also ascending to one of two mics placed to the right and left of drummer Ventor Reil’s elevated riser.

That was just the type of aggression Petrozza encouraged.

“I want to see some violence!” he screamed before playing the opening notes of “Death to the World,” a late offering from the new record.

Judging from their brutally aggressive set at the Avalon, Petrozza is certainly getting what he’s asking for.

View a slideshow from the event below.