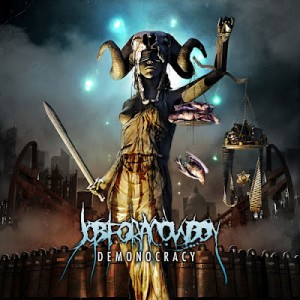 Arizona death metallers Job for a Cowboy have a new album – Demoncracy – coming out April 10, but the band has already released three tracks.

Via MetalUnderground.com, fans can stream “Black Discharge,” while Guitar World is hosting “Imperium Wolves” and “Nourishment Through Bloodshed” is available on their official website.

Job for a Cowboy kicked off a five-and-a-half week North American run of dates at the South by Southwest music festival as part of the Metal Alliance Tour.

The band is joined by The Faceless, Dying Fetus, 3 Inches Of Blood, Impending Doom, Wretched, and headliners, Devildriver.