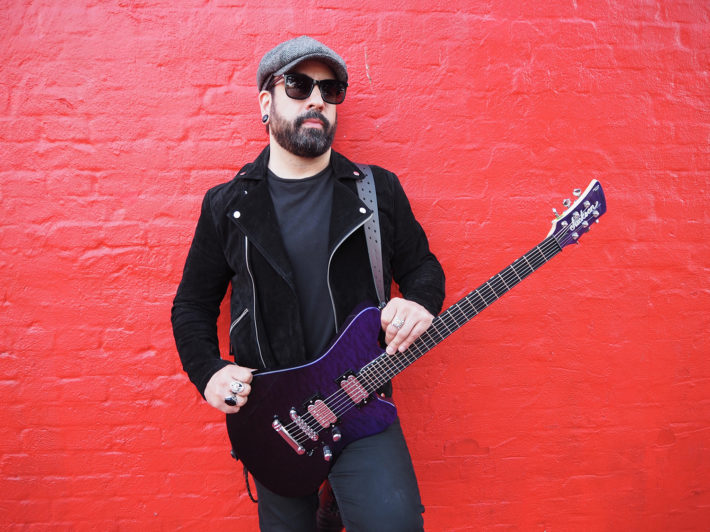 Our Jackson artist roster is absolutely thriving, and it just got even more diverse with the official announcement that Jackson has welcomed Volbeat guitarist Rob Caggiano to the family.

Throughout summer 2019, sharp-eyed fans will see the Bronx-born guitarist putting prototypes of his distinctive new Jackson model through their paces at Slipknot’s Knotfest Roadshow with Gojira and Behemoth as well as Volbeat’s upcoming “Rewind, Replay, Rebound” world tour, which will kick off in Europe with support from Baroness and Danko Jones. Caggiano and Jackson will spend summer and fall honing the new instruments for an official debut in early 2020.

“I’m beyond thrilled and proud to be a part of the Jackson family,” said Caggiano. “Jackson guitars played a huge role for me in my formative years as a guitar player. Besides the fact that some of my favorite players growing up were also Jackson players—Randy Rhoads, Marty Friedman, Scott Ian to name a few, I fell in love with a quirky little guitar myself called the Jackson Outcaster in the mid 1990s. It quickly became my main guitar for a few years.

“I was immediately drawn to the shape and the look of that guitar back then and I always felt that it stood out from the pack in a very cool way.  It’s been somewhat of a recurring dream of mine over the years to actually revisit that shape and really make it my own. It’s very  exciting for me to finally get that opportunity right now and to be working on this concept one-on-one with guys like Mike Shannon and ‘Red Dave’ Nichols and the entire Jackson Custom Shop team has been a dream come true for me in and of itself. These guys truly are ‘wizards of the highest order,’ and I can’t wait for other guitar players to get their hands on this thing. Between the playability, the incredible looks and feel, and the killer tone it spits out— I’m really proud of what we’ve come up with so far.”

Caggiano is no stranger to Jackson fans. An acclaimed musician, songwriter and producer, he joined Anthrax as lead guitarist in 2001, appearing on 2003 album We’ve Come for You All and 2004’s The Greater of Two Evils. He was onstage with the band during the famous 2010-2011 “Big 4” tour alongside Slayer, Megadeth and Metallica, and he played on and produced Anthrax’s 2011 critically acclaimed album Worship Music.

Over the years, Caggiano has also garnered five Grammy nominations as a record producer/guitarist and has worked with a very wide range of artists including Cradle of Filth, Anthrax, Volbeat, The Damned Things, H20, Jesse Malin and even Bruce Springsteen.

When Caggiano was enlisted as producer for Danish heavy rock quartet Volbeat in early 2013, the collaboration was so phenomenally successful that he was quickly invited to join the band as well. The resulting album, Outlaw Gentlemen & Shady Ladies, achieved major chart success on both sides of the Atlantic, as did 2016’s Seal the Deal & Let’s Boogie.

Caggiano’s partnership with Jackson comes just in time for the newest Volbeat release to feature his powerful playing and production — August 2019’s Rewind, Replay, Rebound. The 14-song collection was preceded by May 2019 singles “Parasite,” “Leviathan and “Last Day Under The Sun.”

“You can hear my new Jackson signature guitar all over the new Volbeat album, which comes out Aug. 2,” said Caggiano.  “I’ll be hitting the road with them this summer starting with the Knotfest tour, and I can’t wait for everyone out there to hear this thing scream.”