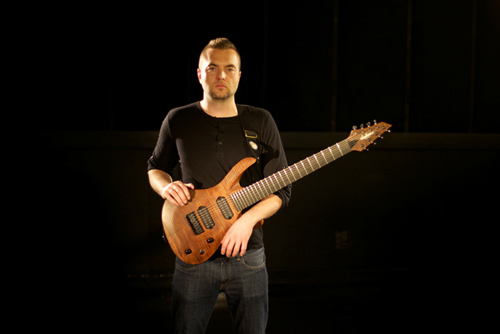 Ryan Glisan has been busy.  Shortly after releasing a sophomore full-length album in the middle of 2012 with his band Allegaeon, he received  an intriguing invite from As I Lay Dying frontman Tim Lambesis.

Lambesis was looking to put together a group that could offer a heavier dark metal sound., and Glisan soon agreed to join the project along with Embodyment axeman Andy Godwin.

The fledgling Pyrithion had limited time together to write new songs, but they are confident in the finished EP, The Burden of Sorrow, which drops tomorrow.

JacksonGuitars.com caught up with Glisan to get the lowdown on his new project.

JacksonGuitars.com: How did you and Tim Lambesis meet up?

Glisan: It was honestly kind of random. I basically woke up one morning and had a text message from him asking if I was interested in this project. I didn’t seek it out really.  I actually got the same text from Daniel Castleman, who is an engineer at Tim’s studio. Apparently Tim had been wanting to do a project that is much heavier than As I Lay Dying for a while now. I guess he asked Daniel what guitar players he thought would be a good match for what he was trying to do, and Daniel brought my name up. I wasn’t really expecting it, considering I’ve really only met Tim twice and haven’t had any long talks with him or anything.

Has Pyrithion been a welcome creative outlet for you? A way to do something different than Allegaeon? 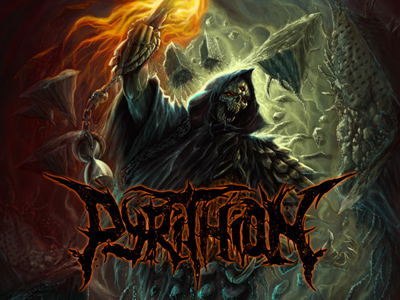 Inevitably, I’m sure it will be. It’s called an EP, but it’s really more like a pilot for a TV show. For us, we hadn’t been in a room together before recording the EP, so it was a test to see what it would be like to work together. That being said, Tim didn’t give me a whole lot of time to come up with stuff. It was kind of like, “Hey dude, I want to record some songs in October before I leave to tour,” and that was less than a month away, if I remember correctly. I wrote two of the songs on the EP, and I just went at it. I couldn’t get too nitpicky with it because I didn’t have time. In the long run, I’m sure it will be a different creative outlet for me, but in putting together the EP under the time constraints, it was one of those things you couldn’t think too hard about.

How could the sound evolve with more time to tinker with the songs?

I think our full-length album will be more dynamic and diverse. It’s hard to put together what you want to be as a band after only a month of getting to know each other and working together. I think it will evolve into something good, I just don’t know what yet.

I tend to want to mess with songs for a really long time so they are 100 percent ready to go before I even get to the studio. This time, none of the songs were done before we got to the studio, so we just had to go with it. We recorded all of them in about a day. The whole thing was a last-second thing, just give it a shot, put it out and see what people think about it. I’m happy with it. I feel like I could have fine-tuned some things, but I can’t really complain how it turned out considering how much time we had to do it.

You helped us out by doing a demo for our Jackson USA Select B8. Did you use seven- and eight-string guitars on the EP?

The two songs that I wrote were both on the eight-strings that I have.  Andy had some riffs that he wrote I think the night before that we made into a song with a seven-string.

Are there plans for a Pyrithion tour?

We talked about it, but nothing definite about doing a show or a tour. I think that’s the plan, to not necessarily have it be a side project, but more of an actual band where we play shows, sell merch, do all the regular band stuff. Right now, we’re trying to go one step at a time. We’re just trying to get some songs done to record some time later in the year.

What’s coming up for Allegaeon?

What we’re doing now is doing a little songwriting. We don’t really have plans to do another album yet because it hasn’t been a year since the last one came out, so it’s a little too soon for that. We’re doing the New England Metalfest in April, so we’re flying out for that. And then, we’re trying to get a music video done, and that takes coordination.

What song is the music video for?

Originally, it was supposed to be for “Formshifter,” but since I’m doing the editing and it’s one of the longest songs on the album, I might actually suggest we switch songs. It’s over five minutes long, so I might suggest another song that’s a little shorter. We’ll see if that happens or not [laughs].