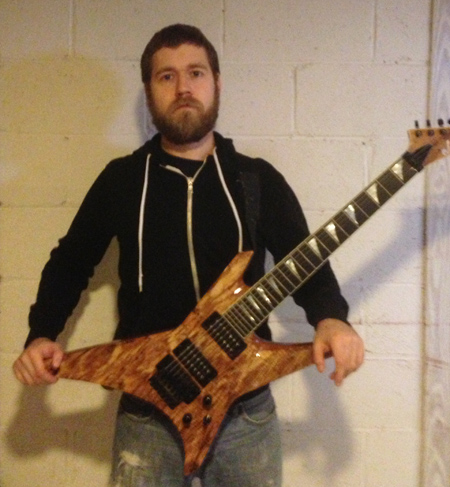 Ever since their EP Teratogenesis came out in September of 2012, fans have been clamoring for new material from Boston death metallers Revocation.

Luckily, the quartet is putting the finishing touches on their next full-length album, a self-titled gem of true thrash goodness.

With the record due out soon, JacksonGuitars.com caught up with frontman Dave Davidson to discuss how things have been going.

JacksonGuitars.com: You haven’t been off the road for very long. How fast did you get back into the studio?

Davidson: We started right at the beginning of February, and we recorded the drums first in this new studio we haven’t been to before. From there, we’ve been recording at my place, basically.

JacksonGuitars.com: How does it work recording a record with an entire band in your own home?

Davidson: That’s how we’ve done it on every recording. We re-amped everything, which is getting the direct signal from the guitar. What we’re hearing is like Line 6 pod tones for now, and then once the guitar and bass parts are recorded, our engineer goes in and re-amps it. Basically, he takes that signal and plugs it into an amp, and then the guitar plays as if I was playing live. It’s kind of cool because you can experiment with some different sounds.  Put an overdrive pedal in front of an amp, for example. You can mess around.  Sometimes, you get a guitar that will sound good just by itself, but hearing it in the context of the whole mix, that’s when things can change. We felt comfortable re-amping. I thought, “I don’t know about this.” But our engineer said, “Just trust me.  This could be the wave of the future,” if you will.

JacksonGuitars.com: What about the vocals?

Davidson: As far as the vocals, it was literally opening up a closet door, putting up some blankets to deaden the sound and throwing a mic in there. We’ve been doing it really DIY.  When you don’t have huge recording budgets, you can’t afford to go and be in a studio for a month or two months at a time, so we do it more this way. And at the end of the day, we get into the studio when it counts. The drums were recorded in a real studio to get that full-room sound. And of course, we’re using real amps at the end of the process, but that just goes to show what a good engineer can do with a mix.  You don’t have to be in a million dollar studio to get a good sound.

JacksonGuitars.com: How long have these songs been building?

Davidson: We’re constantly writing.  Some of this material is from a little while ago. We don’t write much in the actual studio, anyway. We like to be prepared and have as few surprises in the studio, to make sure we’re really passionate with the material before we lay anything down. Little things will change here and there, whether it’s a vocal pattern or a solo or something like that.  Those get more fleshed out to get tighter in the studio.  But the skeleton, we assemble that going in.

JacksonGuitars.com: You mentioned that this album will be self-titled. Why?

Davidson: It’s not really a super-deep meaning. We just feel like this record is a culmination of where the band is at, at this point in time. We got a new bass player, Brett, so I feel like our lineup is super-strong right now. I also feel like the material has certain flavors from every record we’ve put out so far. It’s a representation of what Revocation is at this time and what we want to sound like.

JacksonGuitars.com: How soon will you get back on the road?

Davidson: We’re doing a short stint with Goatwhore. It’s about a week long with our buddies with Ramming Speed, so that should be really fun.  We’ll be doing some things in the summer that I can’t really announce yet, but we’ll be on some pretty killer tours.

JacksonGuitars.com: Are you excited to play the new material live?

Davidson: For sure. The gigs we’ll be doing, we probably won’t have a really long set, so we’ll have to plug in one or two songs off the new record.  But hopefully, we’ll be able to do a headliner and be able to put some more new stuff in there.  At this point, we have three records plus an EP out, so we feel like we have to play material off every release.  That’s a lot of songs to choose from.

JacksonGuitars.com: You posted a picture on Facebook with a banjo. Can we really expect a banjo making a cameo on a song off this record?

Davidson: It’s not a huge part of the song. It’s pretty quick. But that song, in general, is kind of thrash-metal meets chicken pickin’.  It’s got a bluesy lick with some thrashy chord changes.  There’s a break in the song, and I thought, “Oh man, it would be cool to have a banjo play just that one break to introduce that scene.” So, I went out and tried it, and it came out pretty cool. It’s a nice nod to that technique, one that’s not usually associated with metal, especially with the more-extreme types of metal, without sounding too forced or too hokey.

I think that’s something that we try to do with our band – take outside elements that we enjoy from other types of music and find a way to twist them and pervert them into the metal genre while still being heavy at the same time.

JacksonGuitars.com: Were you using seven-string guitars during the recording process?

Davidson: Like our last EP, we used a wide variety of tunings. We used our standard E-flat tuning that we’ve used with every release. We also used a drop E-flat. Also, with the seven-strings, it was a little bit of B-flat tuning.  Having the seven-strings there added an extra dimension of heaviness to some of the songs. We write in a different way with those. I feel like more and more bands are using the heavier tunings, so it’s been cool for us to play around with them in our own style. The song with the banjo in it, we actually used a seven-string. But it wasn’t for the whole song, which is what is typically the case.

I tried to experiment with different parts of songs, so in that one, there is no seven-string until the very end. It creates a climax feeling that is heavy at the end. The whole thing is E-flat standard tuning. I thought that was interesting to wait to use it at the end, to wait for a seven-string finish, almost a finale to beef up the heaviness. Maybe people’s ears will perk up and say, “Oh, this just got super-heavy.”