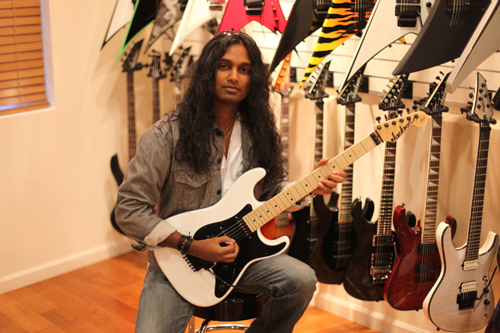 RedOne Production is behind some of the biggest pop songs to come out in recent years, and guitarist Geo Slam is an integral part of that process.

An avid Jackson enthusiast, the Swedish Slam had a hand in tracks by Jason Derulo, Porcelain Black and Priyanka.  Members of RedOne’s team have also worked with Lady Gaga, Jennifer Lopez and Nicki Minaj to name just a few pop sensations.

Having grown up listening to some of the finest shredders, Slam still takes his Jackson Adrian Smith signature model into the studio to cut radio-friendly tunes that continuously blow up the airwaves.

JacksonGuitars.com recently caught up with Slam to talk about his career and transition into this unlikely pop genre.Q: What was your entry into the guitar world?

It could have been anybody, but hey, I saw how my cousin could get all these girls, and then I saw the same thing with Malmsteen and I thought, “I want to do that. I want to make that impact on people just by playing the guitar.” So, I picked up a guitar.

Q: What was your first guitar?

A: It was my aunt’s old acoustic guitar, and the strings were so out of tune. I chose between sports and music, actually. I was in the running for the national junior team in soccer. But, you can’t have the same lifestyle in sports. It’s embarrassing to tell people that, but it wasn’t the passion for music or anything. That came later.

But you can also say that music can touch people, and I got that. That’s why I stuck with it.

Q: How did you get involved with Jackson?

A: My guitar teacher was endorsed by Jackson at that time. And really, I thought the biggest thing was to look cool. He said, “One day, we have to get you a real instrument because while these look cool, they don’t sound great.” I couldn’t hear the difference, but I learned that you don’t even need to plug it in. You can hear how good an instrument is just by playing it without an amp.

The first thing I learned was how to hold a pick. He said, “You can choose if you want to be like Guns N’ Roses, you can find that technique, but if you want to really play, you have to start from the beginning.” That’s where he started – teaching me how to tune, what the pickups do, all of that. And he taught me all of that on his Jackson guitars. It felt natural for me to just stick with that.

A: Not the V [laughs]. If he had owned one of those, I probably would have gone there, but I leaned in the other direction.

Q: Where did you meet up with Nadir Khayat and RedOne Production?

A: We’ve known each other since we were in our early 20s. In Sweden, the music business is quite small anyway. Everybody knows each other. He was very serious back then, and we did a couple of small things together, hanging out in different studios and things like that. But I went out on tour, and he went to New York. We didn’t see each other in like eight years, but he was in Sweden with Gaga. He asked me if I really wanted to join his team.

Q: How do you know when you have that perfect hook?

A: It’s a craft. If you know your history, you’ll have a future too. It’s the same in life. If you look at the Beatles’ catalog, or the Beach Boys, the ’60s Motown stuff, there are certain elements that aren’t rules, but if you look, maybe 80 percent have those elements in there. That’s what we do. Also, he’s from Morocco, and moved to Sweden and L.A., and I’m from Bangladesh, and moved to Sweden and L.A. It’s funny when people say it’s a Swedish team, because there’s one white guy who is from Sweden but was born in South Africa, and the rest are from Morocco and all over.

Q: Do you have to think more globally when working on songs that can appeal to the masses?

A: I think the secret for us – or maybe not even a secret – but we make global music, not just focusing on having to work in the States or any one place. It has to work everywhere. Our philosophy is to make it equally important for a song to work in Norway as it does here. Melody comes first, because even if people cannot understand the lyrics, they get stuck with the melody. We’ve been pretty successful so far.

Q: What is in the pipeline for you?

Right now, I’m working with Backstreet Boys and their 20th anniversary [album], which is coming out next year. And then I am working with a Swedish artist on three songs for next year.

A: Do you still listen to metal?