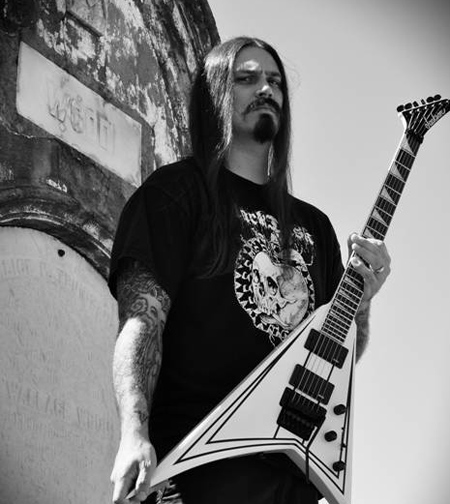 Matt Brunson has been a busy musician since joining Louisiana sludge metal stalwarts Crowbar in 2009, and the upcoming year will be no different.

Not only is Crowbar about to start recording the band’s 10th studio album, there also figures to be a slew of tour dates on the horizon in 2014.  But that’s nothing compared to Brunson’s first appearance with Crowbar, when he was asked by frontman Kirk Windstein to fill in at a show with a mere week to prepare.

Brunson went to work then in 2005, and he’s been at it as a full-time member of Crowbar after replacing guitarist Steve Gibb in 2009.

JacksonGuitars.com recently caught up with Brunson to see what the guitarist has been up to.

JacksonGuitars.com:  With the fast transition from the road to the studio coming up, how will this writing process work for you?

Brunson:  Yeah, the last show of this tour is Dec. 14 in New Orleans, and the following Monday, we head to the studio to start recording the next Crowbar record.  This one is a little different.  Sever the Wicked Hand was about five years removed from the previous album.  So by the time we were ready to record that, a lot of the songs had already been written and were pretty much done.  This time, the label wanted 12 songs, and so far we have eight written.  The writing process does and will fly. 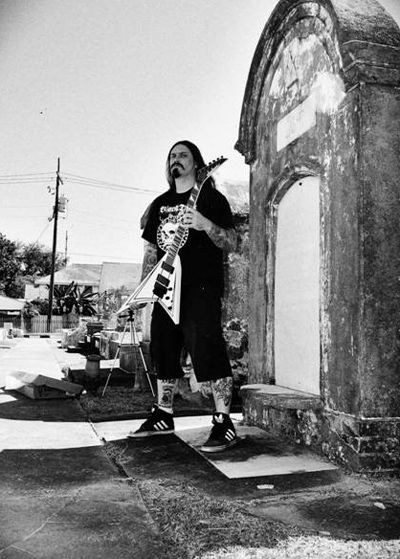 I live right across the street from Kirk, and our new bass player Jeff is crashing out at my place.  We’ll all get together over dinner and pull out the guitars and amps and just see what happens.  Kirk always says that if you have a great riff, that’s a song.  You just have to build off it.  We can sometimes bang out a song in two hours or less.  One time, Kirk called me with something and he wanted me to write a harmony for him in drop A.  I wrote it, but didn’t know what to expect.  Once I played it to him, it just so happened to be in the same key of his original riff.  That kind of stuff happens a lot.  It’s a pretty tight deadline to get this thing finished, but it won’t be a problem.

JacksonGuitars.com:  How did you meet up with Kirk in the first place?

I’ve known Kirk for about a decade at this point.  My old band used to open up for Crowbar when they played local shows.  In about 2005, Crowbar had some shows booked with Hatebreed.  The guitarist from Crowbar at the time had some other obligations and couldn’t play the show, so Kirk actually asked me to learn their set in about a week.  I thought he was going to ask me to be a tech, or something.  We grew as friends since then.

JacksonGuitars.com:  How did you possibly learn the set that fast?

Brunson: It honestly wasn’t that bad.  I’d been listening to the music since I was a kid, and at that point, I’d just go over to his house and ask about how riffs went.  I’m one of those guys who will sit up all night and practice.  I just did it then, and did the same thing last year when I played bass for Prong during their European tour.  It was the same thing – I got a call and had about 40 hours to learn their entire Beg to Differ record.

JacksonGuitars.com: What led you to the guitar?

Brunson:  I guess when I was about 8 years old, I saw one of my neighbors had a little blue Series 10 guitar with a Floyd Rose on it.  I couldn’t really afford it and didn’t really start playing until I was 11.  But by that time, I had already been listening to the great guitarists out there.  And then came Pantera.  Dime [Pantera’s Dimebag Darrell] was the one who set it off.  I wanted to learn all his licks and was bummed out I couldn’t grow a goatee at 11. [laughs]  From there, the next big step was Yngwie Malmsteen, Steve Vai, all the shredders.  I spent the next eight or 10 years trying to learn all that stuff.

JacksonGuitars.com:  What have you been playing live lately?

Brunson:  Right now, I’ve been pretty stoked on the Pro Series Rhoads, and it’s in Silverburst.  I’ve always loved that color.  It sounds great, with the [EMG] 81 [pickup] in the bridge and the 89 in the neck.  And even though it might look like it only paints with one color, it’s really versatile.  The V is kind of my thing now, but I’m also really interested in the Pro Series Dinkys.  Those guitars have all the bells and whistles you need to have a really good piece in the studio, but I’m also not really one that is so into fancy looking guitars.  That’s why I like the Pro Series stuff.  They’re great, quality instruments, but they don’t look too flashy.

JacksonGuitars.com:  So after the next record is finished, will you be able to take some time off?

Brunson:  No way. We are booked solid, with even some dates that we haven’t released yet.  We’ll have the album turned in by Feb. 1, and then later that month, we’re heading to the U.K. for a tour.  Then we’ll have a lot of festivals during the spring and summer.  After that, the album will actually be out, so it will be back on the road to support that.  It’s definitely a good thing.  If we couldn’t work like this, we’d all be going nuts. [laughs]

Crowbar will be playing the Cobra Lounge in Chicago on New Year’s Eve.  For more information, visit the band’s official website.