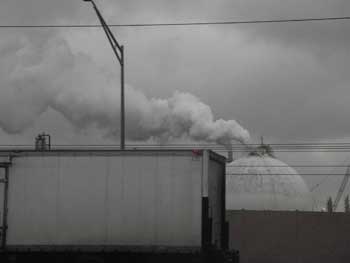 Megadeth’s Chris Broderick is on the road with David Ellefson for the Jackson Clinics tour, and he offered this post to JacksonGuitars.com from Custom, Metal & Classic Guitars in Vineland, N.J.

Here’s what Chris had to say:

Day Two of the Jackson Chris Broderick, David Ellefson clinic tour started with us checking out of the hotel next to JFK on a dreary gray day. We headed down the LIE [Long Island Expressway] and fought our way to the New Jersey Turnpike. After one or two wrong turns we arrived at out next hotel next to PHL [Philadelphia International Airport].

We had a couple hours to relax and then headed to the clinic at Hangar 84, which took another hour in traffic.  Once we got there though things looked up. We were met with very helpful people, Frank Ciavarro (district sales manager), Steve McQuaid ( owner of Custom, Metal and Classic Guitars), and a slew of other people were there to help us. We had some killer hoagies, and Starbucks before the show and recorded the riff of the day. Then came the clinic with a 150 loud and enthusiastic people in the crowd, which is not bad considering that the World Series was on.

One thing I notice right off the bat was the two long-haired kids headbanging the whole time, which always makes playing more fun. This clinic definitely had a club gig feel to it because the venue was just that (a great place for metal music). David and I had a full P.A with monitors, and it sounded awesome!!! After the clinic we signed for the fans and saw a ton of Jackson guitars that we signed as well.

All in all a good day, tomorrow it’s an early flight to Ft. Wayne, Ind., so we will see you there.