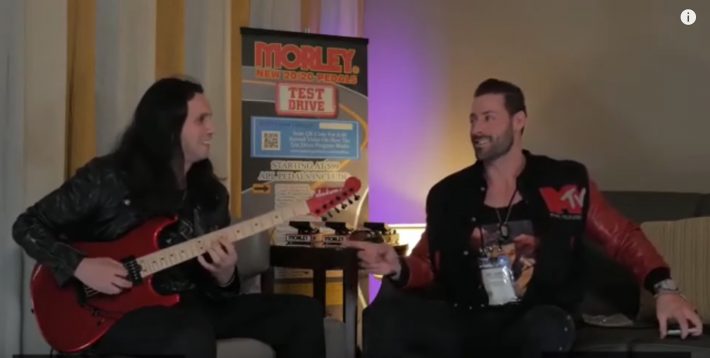 Gus G. sat down with Masters of Shred’s Derek Thomas for an episode of Talking Shred where the Greek metal god showed off his new Jackson Pro Series Signature Gus G. San Dimas® model and talked about his upcoming feline-inspired side project.

“I call this the ‘1986 Guitar’ because it looks very 1986, like it came out of that era,” said Gus G. of his Candy Apple Red beauty. “I grew up on a Stratocaster, that was my first guitar. I just wanted to go back to playing a Strat and Jackson made it happen!”

Gus G. recently started his own line of pickups and loaded his San Dimas with a set of his all-new scorching hot Titan humbucking pickups.

“The very first [pickup] project I did are living right here in this guitar. I got in touch with Jackson and said, ‘Look, if we do these new guitars, how about trying this out?’ And they were cool enough to let me do that.”

Aside from covering guitar duties in the upcoming Firewind album and designing his signature Jackson axes, which also includes new Star models, Gus G. also announced a side project that was inspired by the love he has for his cats.

“It’s called Cat Metal; I developed it on the last flight over to NAMM,” said Gus G. “I was thinking about my cats and how much I miss them. I thought I’d come up with a band called Cat Metal. I write about things I love, which are my cats and their behaviors, and I think a lot of people will resonate with it.”

Watch Gus G. below in the full episode of Talking Shred to find about some of his working Cat Metal song titles.