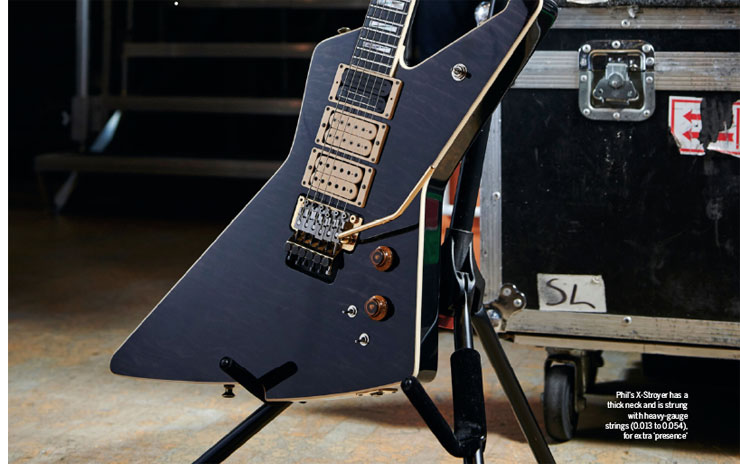 As for the criteria that goes into a Leppard riff, Collen had this to say:

“Sonically, the guitar has to go in a certain place. There’s a lot of players who can really fuck up a singer’s melody because their oblivious and going right across it. With Leppard, the guitar can’t get in the way. It’s got to be intricately woven so it doesn’t fuck the vocals up, but still have a groove. I mean, there’s so many guitars on Hysteria, but they’re very obediant.”

As for the gear used, the Jackson signature artist primarily stuck with his Jackson PC1 for recording, three of which are pictured in the piece.

“At Jackson, we’re constantly tweaking my PC1 guitars, so they’ve evolved with all this titanium stuff (on the Floyd string retainer). I use really heavy strings. They’re, like, 0.013 to 0.054. I also use the metal picks, and it sounds so different. [Producer] Mutt [Lange] used to say, ‘Wow, that sounds so much more present.’ For this record, I used a PC1 that stays at the studio. We had .014 to 0.056s on that one … you can really thrash it!”

Collen also makes mention of his Jackson X-Stroyer, strung with heavy-gauge 0.013 to 0.054 strings for extra presence.

“Feel the size of the neck on that,” said Collen. “It’s just the sound and the feel of the thicker neck.”

The magazine is on sales now, and you can enjoy the full piece by ordering Guitarist here now.