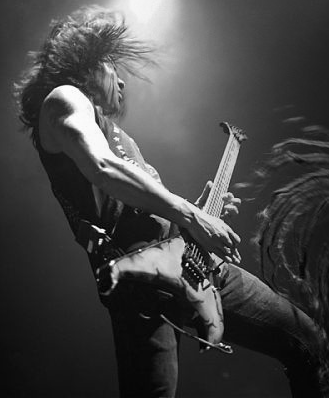 Death Angel lead guitarist Rob Cavestany took part in Noisecreep’s “Five Albums That Changed My Life” series to discuss the key albums that have made an impact on his career.

Cavestany’s list is so broad in genre that it even includes Elton John’s 1975 Goodbye Yellow Brick Road.

“It is one of my first memories of actually listening to music and falling in love with songs,” Cavestany told Noisecreep. “This is still one of my favorite albums to this day. The songs are incredible and I’m so glad it has influenced me in songwriting.”

The Bay Area thrasher also lists Ozzy Osbourne’s 1980 Blizzard of Oz and credits Randy Rhoads for inspiring him to learn and practice guitar.

“In this case you can judge a book by its cover as this album was and still is one of the most influential slabs of music available,” he told Noisecreep. “At least for a guitar player such as myself who can directly credit Randy Rhoads for inspiring me to learn and practice guitar – for real. My life is what it is to this day because of that album.”