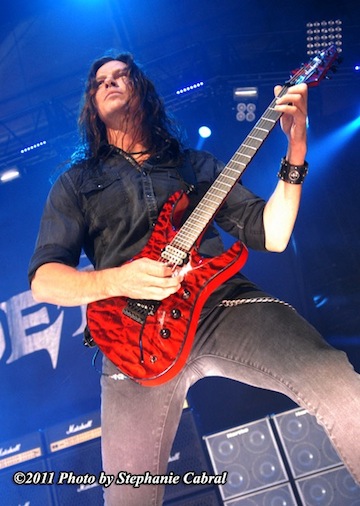 You may know of Chris Broderick as Megadeth’s unrelenting metal guitarist. What you may not know is that he’s equally as skilled playing classical guitar as he is with electric.

The Jackson signature artist was recently interviewed by Roadrunner Records to discuss his classical approach to songwriting, and how his style works well when composing with band frontman Dave Mustaine.

“I’ve got a lot of time invested in counterpoint, which is the main form of composition that Bach would use,” Broderick told Roadrunner Records. “I utilize that information when I write and when we come up with guitar harmonies.”

Despite their difference in musical training, Broderick said his style and Mustaine’s complement each other.

“[Dave] brings an insight from a totally different light than I view it from,” Broderick told Roadrunner Records. “And you can sense it in our playing styles, too, that we’ re very different in that sense. So I think that’s awesome.”

Megadeth’s new album TH1RT3EN, is out Nov. 1. Click here to pre-order, and click here to read the whole interview via Roadrunner Records.