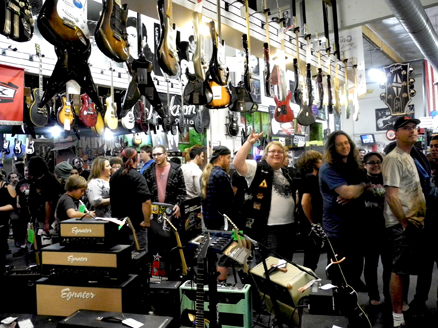 So,  the last clinic on the David Ellefson, Chris Broderick Jackson tour … almost brings a tear to my eye. Seriously, I must say I had a great time playing in a more intimate venue, and being able to hang out with the fans.

The flight from Reno was early —  we had to be up at 5 a.m. and it felt like we had just gone to bed. We arrived in San Diego and got to the hotel around 9 a.m. and had a decent amount of time before we needed to be at Guitar Trader for the clinic. This was great because it was my girlfriend’s birthday and she had driven down to San Diego so we could spend it together.

At 4 p.m, we met down in the lobby and hopped in Mike Tempesta’s (Jackson A&R) car to go to the store (stopping at Starbucks on the way of course). There were already 20 or more people waiting for the clinic to start once we arrived, and by the time we got started, the place was packed.  I would guess 80 to a 100 people,  all of whom seemed very into it — vocalizing, head banging, and cheering constantly, which made it easy to perform and interact with the crowd.

Jeff Baumgart and all the guys at Guitar Trader were very helpful and got us set up to play and then sign autographs. Speaking of signing, David and I met some crazy fans who really make us appreciate what we do for a living. Kyle (probably in his mid-teens) came down from Modesto, Calif., (7 and a half hours away) to meet us, and have me sign his receipt for the purchase of one of my signature series 7-string Jackson’s ( I appreciate that Kyle!!!!). Lots of guitars and basses were signed as well, and I’m sure there were some great players in the crowd.

At the end of the night, David and I went to an Italian restaurant called Filippis with Stephanie Cabal (my girlfriend), Mike Tempesta, and Kevin Kroeger (Jackson engineer). The pizza was great and the vibe was old-school Italian diner. To end the night we all celebrated Stephanie’s birthday and ate some cake.

I can’t wait to put together another clinic tour with Jackson, as they treated us so great and had everything planned extremely well.