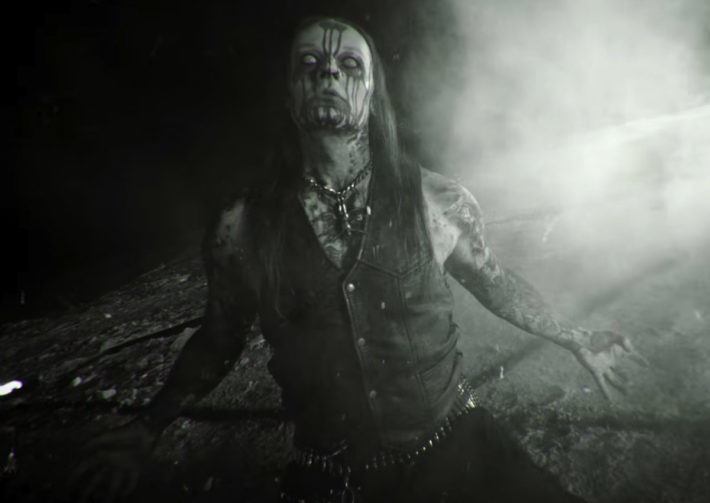 The clip was shot and edited by Polish company Grupa13, and is heavy on pagan rituals, blood and fire.

“The song is both a chant and a metaphorical description of the ancient Baphomet deity, explained singer and guitarist Helmuth Lehner to teamrock.com. “The church considered it an enemy and a demonic character, so of course, we enjoy using it against them to mock their ignorance and witless fears. The sabbatic Ritual Goat, a divine androgyne, the creator. Power absolute. Goat God Dominus!!

“The arrangement deals with the duality of life: Man/Woman, Death/Life, Fire/Water, Human/Demon, Love/Hate. It is also about discipline, freedom and the will to walk your own path ‘alone’ without letting someone else decide things relating to your life. Its essence is purity in solitude. When two become one, all is silent. There have been many old rituals for understanding Baphomet since it is not a deity to be summoned, but rather one to become. There are influences from these rituals in the text, which is the reason why it is written in the first person perspective. Non mortuum, Non vivit, There is only me. Ego sum!! Expect evil incarnated in audio and visual form.”

The Jackson artist also calls the new album their most brutally heavy offering to date.

“The drums are precise and very technical with loads of breaks, fills and tempo changes,” said Lehner. “The bass is like a panzer tank. Also, the rhythm guitars are utterly aggressive and obscure. You don’t hear guitars like that anywhere with such a massively low tuning.”

Released on Nucleaer Blast, Totenritual was recorded at Stage One Studios in Germany and Studio Mischmaschine in Austria and was mixed by Jason Suecof and mastered by Mark Lewis at Audiohammer Studios in Florida.

The artwork was created by Greek artist Seth Siro Anton, who also painted the cover artwork for 2006’s Pestokalypse VI and 2014’s Conjuring The Dead.