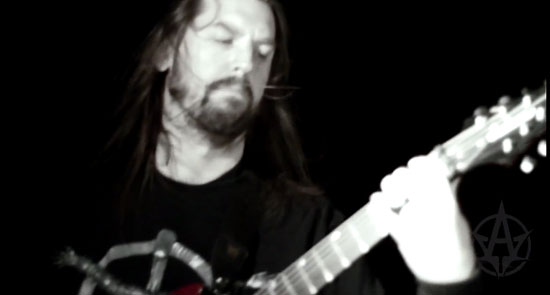 Colorado-based metal merchants Allegaeon have released a new video for the track “Our Cosmic Casket,” which comes off latest album Elements of the Infinite.

In the clip, the guys rip through the brutal song, only to be interrupted by an associate at once they’re finished.

“When we set out to film two music videos to help promote the new record, we decided to choose polar opposites in terms of musical feeling. One being ‘1.618’ in the more melodic sense, and ‘Our Cosmic Casket’ in the more straight-up death metal sense,” guitarist Greg Burgess told Guitar World. “Our thought process was to try to encompass every facet of our audience, and which style they were more drawn to.

“Each of these videos makes up a part of an overall story arc we plan to film. Part one being ‘1.618,’ and now part two, ‘Our Cosmic Casket.’ This video story line basically is we needed to get rid of our merch guy Myles, so we can pretend to be all brutal and film a serious video. Of course, in classic Allegaeon fashion, it gets screwed up. Myles returns early and blows the whole vibe of what we were going for.”

See all the action unfold after the jump.